Weapon comes with an integrated muffler. Many parts are replaced with lighter analogues, which makes the weapon significantly lighter.

The Lightened IL 86 is a customized IL 86 assault rifle available in S.T.A.L.K.E.R.: Shadow of Chernobyl.

The Lightened IL 86 comes with an integrated silencer, and is 2 kg lighter than the original rifle due to new components. It is also one of the most reliable assault rifles in the game, while the normal IL 86 has poor durability (somewhat mirroring the improvements done to the newer L85A2 model).

Like all special weapons with integrated silencers, the Lightened IL 86 does not suffer from the 20% stat penalty caused by mounting a silencer on a weapon.

This weapon is held by a Loner called Master. Master is usually found in the Army Warehouses, in a camp near the Bloodsucker village, although he often wanders off, and is usually found at the Red Forest once the player deactivated the Brain Scorcher. Snitch can give a mission requiring to kill him, allowing the player to take his weapon as an extra reward. 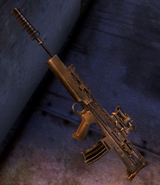