Limansk-13[1], simply referred to as Limansk, is an abandoned town located within the confines of the Chernobyl Zone. It can be visited in S.T.A.L.K.E.R.: Clear Sky.

A secret research city, Limansk is an empty place, abandoned by its former inhabitants. The derelict buildings and vehicles that litter the city witness only the occassional bandits or Monolith patrols passing through. After the formation of the Zone, it became an even more unwelcoming place, as anomalies filled the city and its surroundings, cutting it off from the world. Only the Monolith and the Bandits found their way into the city.

When the massive blowout came in September 2011, the anomalies disappeared and stalkers poured into the city, looking for an easy way past the Brain Scorcher and clashed with Bandits and the Monolith. The Limansk war zone is a mandatory element of the player's progress towards the Chernobyl Nuclear Power Plant and a point of no return in the game.

It lies to the north of the Dead City.

Limansk was the stuff of legends, considered a myth by many, but Limansk was quite real and existing. Located practically in the middle of nowhere, the city was built to house the Radiowave Institute and accomodate its researchers and staff. The inhabitants weren't popular with local residents, they were suspicious of strangers and trusted no one outside their city. According to Forester, they constantly mumbled something to themselves and praised the Soviet regime even as supply shortages manifested themselves. Furthermore, should any outsider stay in the city, they suffered from headaches, probably caused by the massive radar.[2]

Available evidence suggests that Limansk was a research center focusing on manipulating the human consciousness through use of radiowaves, and also the first field test of the technology, indicated by Forester's statements. Curiously, despite its importance, the city was not evacuated in the wake of the Chernobyl catastrophe. After the second incident, when the first blowout happened, all the remaining citizens disappeared, as if they were burned instantly – only their shadows, dark silhouettes, were left on the walls of the buildings and even they faded with time.[3]

By 2011, the town was completely abandoned, with Stalkers roaming the streets, avoiding deadly anomalies and fighting for dominance over the only route to the heart of the zone not affected by the Brain Scorcher. 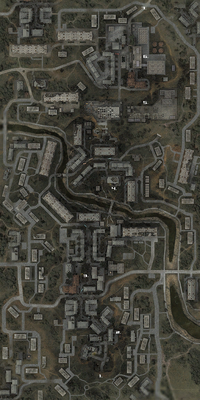 Stalkers from Freedom and Duty lie dead in the city's square.

The Construction site with the Monolith troops rooted out.

The room before the teleporter.

The door of the room housing the teleporter.

Retrieved from "https://stalker.fandom.com/wiki/Limansk-13?oldid=69621"
Community content is available under CC-BY-SA unless otherwise noted.