The Limansk Hospital is a location in S.T.A.L.K.E.R.: Clear Sky.

The actual history of the hospital is unclear, although it is almost certain that the hospital was used by the inhabitants of Limansk. In Clear Sky, it appears that an earthquake or some other phenomenon caused the hospital to sink abruptly into the soil, as evidenced by the acute structural damage and by how the only entrance set on a wall is meters below ground level and only accessible by a ditch.

The inside of the hospital lacks the Zone's normal irradiated areas and lands of anomalies, but the vast quantities of hostile stalkers make it dangerous all the same if not more. Nearly all of the hospital has been occupied by the Monolith, and most of the paths that lead further towards the Chernobyl NPP are fenced off by a machine gun emplacement or some other kind of fortification.

The area is employed as a last line of defense by the Monolith. The first area of the hospital is being encamped with a sniper point on the roof and a machine gun pillbox on the first floor, pinning down a Clear Sky strike force that is about to push through the hospital. As Scar progresses through the second area of the structure, the Military will request an attack helicopter to eliminate all stalkers in the vicinity, the Monolith soldiers and Scar included. After the helicopter crashes, the explosion will open a path to the third section of the hospital, where the Monolith will trap the player, forcing him to wait for Clear Sky reinforcements. After all the enemies are eliminated upon their arrival, access to the Chernobyl NPP is opened, where Scar must enter through, while the remaining Clear Sky soldiers will fend off the counterattacking Monolith.

The area is a point of no return in the game, since you won't be able to return to Limansk anymore, once you arrive at the location. All the sections of the hospital are filled with hordes of Monolith attempting to defend the area from Scar and the Clear Sky advance squad. Once the player enters the center area of the hospital after destroying the pillbox, a Mil Mi-2 scout helicopter will arrive and will gun down Scar and the Monolith fighters. The helicopter must be destroyed to proceed through the next area. This tightly-spaced area serves as a Monolith ambush section, with another machine gunner at the entrance point to the power plant. Scar must wait for one minute before Clear Sky fighters arrive, where they will destroy the machine gun nest and will accompany Scar towards the final fight.

Originally, the hospital (known as Catacombs1) was supposed to be an underground location used by the player to reach Agroprom Underground and Yantar. The entrance was hidden in the railway tunnel connecting the Garbage to the Agroprom. It should have been discovered by diggers a couple of weeks before the big Blowout and seized by Bandits shortly after. The planned next level, Bridge over river Pripyat, was also cut. However, late in development, it was moved and used to replace Pripyat Underground as a connecting level between the NPP and Limansk-13.

Original point of entry into the hospital 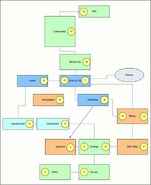 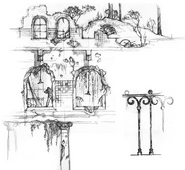