Max, we have a problem at the farmstead, get the boys!

Lukash is the leader of the Freedom faction in S.T.A.L.K.E.R.: Shadow of Chernobyl.

He is a competent and charismatic man, ideal to lead the anarchistic Freedom.

Lukash can be found on the top floor of the main building at the Freedom HQ in the Army Warehouses area. He can provide you with a number of missions. The most notable mission is Destroy the Duty company that requires you, with the help of some Freedom members, to take down all the Duty members at the nearby farmstead; the mission is followed up with Deal with the snitch, and completing them both provides the player with 7000 RU - and, as a side bonus, Skinflint the trader will sell a better, larger variety of equipment.

The player can take part in Skull's mission to eliminate Freedom. Your reward for killing the snipers around Freedom's base and killing Lukash is 8000 RU, but that is more than what Lukash pays you for eliminating Skull and his group, as well as dealing with their snitch. Freedom's armory will be yours to loot if you assist Skull; the armory consists of a rare and excellent Bulldog 6 grenade launcher, several Guardian of Freedom Suits, and a unique Wind of Freedom Suit. Lukash also has a retinue of two Freedom experts sporting Chaser 13 shotguns. If you want to kill Lukash, you'll most likely run into them first.

Furthermore if you don't kill Lukash he will give you the same missions over and over. It's a nice way to get 40 mm rounds and the SIG SG-550 including some AP 5.56 rounds, not to mention the Crystal and Urchin he gives out. So in the long run you are better off leaving him alive. Note that when you visit him there is a detailed map of the area behind him on the wall.

Lukash is not present in either Clear Sky or Call of Pripyat.

If left alive, Lukash will offer several repeatable missions in addition to his storyline quests, most of which offer rubles, 40mm grenades, and AP 5.56 rounds. These include:

Originally, Lukash had a different model, one which eventually ended up belonging to Max. 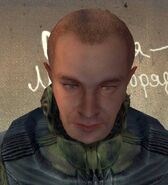