A great pistol, it is the most powerful handgun chambered for the 9x19mm round. It has a good amount of damage, handling and rate of fire. However, the durability is very poor, making it jam frequently. The weapon can be fitted with a silencer, but this greatly decreases its damage. It is so rare that it is unique, only being carried by a single character in the game. The said character is the Captive Dutyer, who must be freed as part of a side mission for Bullet. The captive Dutyer will be killed if the player fails to kill the Bandits quickly enough, or may die on the way back to the Duty checkpoint.

As evidenced by the Anarchy Cell design document, the Martha was originally meant to be a cut weapon, much like the HPSS-1m. The weapon being in the Captive Dutyer's inventory is likely an oversight from the developers.

The Martha's stats are changed greatly in Clear Sky. The Martha now has the best handling for any 9x19mm handgun while retaining an impressive rate of fire. Even without upgrades, it is entirely capable of being fired at a rapid pace without loosing too much accuracy.

Unlike other pistols, when fired while aimed, the recoil only pushes the gun back rather than up. This allows skilled users to deliver multiple accurate shots to specific body parts of opponents in a very short time. However, Martha has the worst reliability from every pistols available in game (worse even than the PB1s).

The Martha in Clear Sky is much more widespread and commonly employed by stalkers who use a Chaser 13 in tandem. It is also held by a good number of Mercenaries in the Dark Valley.

The weapon shares the same upgrade as most pistols and is cheap to maintain, but only a limited amount of technicians can upgrade it. The technicians who can upgrade it include Yar, Thunderov, Garin and Aydar.

This weapon also appears in Call of Pripyat, mostly retaining its stats from Clear Sky, but apart from the full-auto upgrade, it's inferior in every other aspect to the Walker P9m and .45 caliber pistols.

This is the only 9x19mm handgun capable of fully-automatic fire with the 3rd tier upgrade, giving it the highest rate of fire of any pistol in the game once fully modded. Its caliber can also be changed to use the more common 9x18mm rounds, at the expense of durability. However, it has the worst durability from all handguns in game, making it degrade absurdly fast especially when using automatic fire. 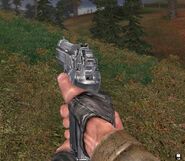 First person view.
Add an image to this gallery 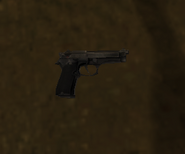 World model.
Add an image to this gallery

Retrieved from "https://stalker.fandom.com/wiki/Martha?oldid=70187"
Community content is available under CC-BY-SA unless otherwise noted.