The Meat Chunk is an uncommon artifact featured in all three S.T.A.L.K.E.R. games.

Manufactured by the Whirligig anomaly. Causes increased cell growth. On the other hand, the newly formed cells are much more receptive to the effects of physical uranium. The artifact doesn't show up very often, but it's hard to call it rare.

The Meat Chunk increase health regeneration by 400%, at the cost of decreasing overall hit protection by 10%.

Both Sidorovich and Barkeep are interested in procuring the artifact. To that effect they offer the player two missions - Find the Meat chunk artifact and Find the artifact called Chunk of Meat. The artifact is wanted for its healing properties by clinics[1] as well as religious figures.[2]

The Meat Chunk can be found in various places. While it is not exactly a safe place to go looking for it, there are a few on the piles of rubbish in Garbage, however it is advisable to watch out for the increasing doses of radiation, and they can also be found behind the camp where Bes is. A few can also be found in the Dark Valley.

One Meat Chunk can be obtained by completing the Purge the dog lair mission for Kitsenko.

In S.T.A.L.K.E.R.: Clear Sky, the Meat Chunk provides a +3 boost in chemical protection, and a +1 in radiation. The Meat Chunk is a good artifact to use to go through chemical anomalies.

The Meat Chunk in S.T.A.L.K.E.R.: Call of Pripyat gives a +6 boost in chemical protection, and a +2 in radiation. The Meat Chunk could serve great purpose to players having to go through anomaly fields.

The Meat Chunk is requested by Garry for his mission to get out of his contract with the Ecologists. He will give 3500 RU in exchange.

The Meat Chunk can be found in chemical anomaly fields; the Swamp in Zaton and the Vine in Pripyat spawns one by default.

A Meat Chunk can be found in the Jupiter Underground, in the room where the first Monolith squad ambushes the player. It is on a shelf (near where the silencer and the energy drinks are), and can be detected with any detector.

Beard also sell Meat Chunks after the player gets the One of Ours achievement. 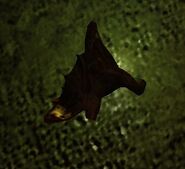 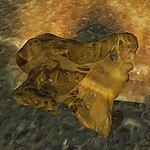