The Merc suit is the standard equipment of mercenaries operating in the Zone. It consists of a navy blue jumpsuit (although some mercenaries might opt for an urban camouflage pattern), an European-pattern tactical vest (also used with woodland camouflage) and a gas mask (based on the XM40 model). It also comes with the standard belt-mounted pistol holster and carrying pouch.

When not wearing a gas mask, users of the merc suit will typically wear a balaclava or a similiar type of mask.

In Clear Sky and Call of Pripyat, the suit is exclusively worn with a gas mask, and all suits use the navy blue color scheme.

Stalker suit from the Merc faction. Its design is based on the suit used by the special forces of the Western armies. Due to a special treatment of the fabric, the armor has a strengthened stability during the physical movement of its plates. Its protective properties are slightly better then those of the PSZ-7 military bulletproof suits.

The Mercenary Suit offers slightly worse properties than the Stalker Suit, however, while both suits have the same weight, it does not sport a night vision module. While the Merc Suit isn't built for the zone due to its lacking stats, it is nevertheless an invaluable starter armor as it will protect the player from most rounds that one will encounter early in the game. Though it's highly recommended that this suit be replaced later on in the game.

The Bandits and Renegades use their own variant of the mercenary suit in Clear Sky and Call of Pripyat, with a brown jumpsuit, and worn simply with a face mask instead of a gas mask. 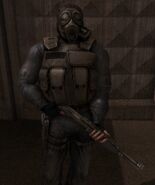 Mercenary Suit in Call of Pripyat.

Bandit variant of the Mercenary Suit, as seen in in Clear Sky and Call of Pripyat.

Garik wearing one of the variants of the Mercernary suit. 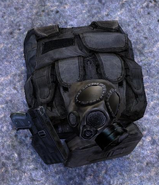 A Mercenary Suit on the ground.