watch 03:19
Wiki Targeted (Games)
Do you like this video?
Play Sound 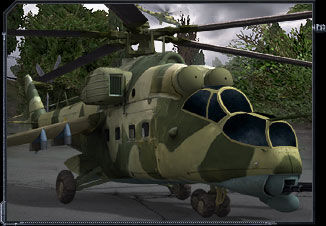 The Mil Mi-24 gunship, NATO reporting name "Hind", is a Soviet attack helicopter commissioned in the early 1970s. Export versions of the same helicopter are sometimes given the model numbers Mi-25 and Mi-35, but presumably the ones used in Ukraine were transferred to the military of the Ukraine before the dissolution of the Soviet Union and are not export variants.

Well armoured and armed, the Hind has a feature unique among gunships: the ability to deploy its cargo of 8 fully armed soldiers or up to 1500 kgs of equipment. While the technology is dated by modern standards, the Hind remains a reliable and trustworthy vehicle to patrol the Zone and wipe out any opposition from the skies.

It is armed with a chin-mounted 12.7 mm Gatling type gun, pylon-mounted rockets, and can reach a 300 km/h cruise speed.

The Ukrainian Military is the sole operator of the Hind in the Zone and these aircraft are a common sight on the outskirts, as they patrol the skies and occasionally blow a rookie stalker to smithereens. They also used them as a transport for Spetsnaz operatives for certain operations.

Interestingly, Duty has a single Hind parked on top of one of the buildings in the Agroprom Research Institute during the events of Clear Sky, which is absent in Shadow of Chernobyl. Given their military background, and the number of abandoned choppers that can be scavenged for parts, it's possible that they have access to at least one working gunship, though this particular aircraft is nowhere near being airworthy

The Mi-24 will never attack the player without provocation (it can possibly attack them if fired upon), though it appears to be a functioning NPC capable of firing its cannon or rockets at any NPCs hostile to the Military.

There is one stalker who managed to save enough money and buy the helicopter. He flew for about 20 minutes over the Zone before the fuel ran out. Now he carries the gas in canisters to the aircraft to get it from near Pripyat.[1]

Mi 24 Hind in Call of Pripyat

The bottom of Mi 24 in Call of Pripyat

Mil Mi 24 at the CNPP assasult in Shadow of Chernobyl

The player being hit by a rocket.

A Military Mi-24 patrolling around the Rookie Camp (S.T.A.L.K.E.R.: Shadow of Chernobyl)

MI-35 in S.T.A.L.K.E.R call of pripyat at the beginning of the game
Add an image to this gallery

Retrieved from "https://stalker.fandom.com/wiki/Mil_Mi-24_Hind?oldid=76107"
Community content is available under CC-BY-SA unless otherwise noted.