A religious cult that is hostile to all but their own, the Monolithians believe in the power of the Wish Granter, rumored to be an alien artifact hidden in the center of the Zone. Members of this faction devote their lives to protecting the secret of the Great Crystal, ensuring that no one ever reaches the center of the Zone.

A typical Monolithian is a former stalker brainwashed by one of the psychic emitters throughout the Zone into serving the will of the C-Consciousness, unflinchingly loyal and ready to sacrifice himself at a moment's notice. This extreme loyalty is achieved by creating intense religious fanatism in the mind of the stalker, directed towards the Monolith.

While physically, they are on par with other stalkers, their religious fervor sets them apart and allows them to ignore wounds and continue to fight, even after they run out of ammo. Stories abound of fanatical Monolith Stalkers, after running out of ammo, ditch their weapons and attempt to kill the enemy with their bare hands, no matter how grievous their wounds[1][2] . This same fervor also prevents others from capturing a Monolith member – if taken into custody, he will commit suicide in any way possible (even by smashing his head against the wall)[3].

The Monolith can also uplink themselves to the C-Consciousness through something known as a Monolith statue, a radar antenna covered with garbage to form a statue. Monolithians kneel in front of it and enter a trance involving head nodding and swaying, and will ignore almost anything around them, even gunshots. The Monolith Fighter and, rarely, idle Monolith Stalkers can be found in the same trance, but without the use of the Statue, possibly attempting to call upon the Monolith for guidance.

Unfortunately, the same mind control that makes them fierce warriors also erodes their humanity. Strider and the Preacher both exhibit a completely flat personality and suffer from a monotone speech impediment, and Strider himself has a poor grasp of language. Other rogue Monolithians under Strider's command have difficulty communicating and tend to speak in halting, jerky sentences. However the case of Strelok, who fully retained his personality and speech abilities even after being brainwashed by the Monolith might imply that Monolith soldiers do not instantly lose their humanity on the spot, but slowly as the Monolith continues to control them, or that Strelok wasn't brainwashed as completely to better blend into the rest of the stalker population and to be able to use his wits (which the Monolith soldiers seem to lose partially) to better fulfill his assassin role.

It is interesting to note that all Monolith stalkers are immune to the zombifying effects of Psi-Emitters, like the Brain Scorcher, and still retain their combat skills.

In Call of Pripyat, Monolith Stalkers gain a new, unknown voice actor. Monolithian speech is revealed to be highly ritualised, referring to each other as "Brother", and relating most situations to the Monolith. Upon sighting an enemy, they remark to their Brothers about the presence of an "enemy of the Monolith", and do much the same upon killing them. Any idle talk revolves around the Monolith, and is as disjointed and monotone as English-speaking Monolithians.

The Monolith clan was originally a group of stalkers, united by their fascination with the Zone. Fascination turned to obsession and obsession turned to fanaticism; eventually, the stalkers became convinced that there is a massive artifact in the center of the Zone, a Monolith, and declared themselves its protectors, growing increasingly hostile to other stalkers. [4][5]

They disappeared in 2011, just before beginning of Clear Sky, simply picking up all of their belongings and marching through the Barrier towards the Brain Scorcher, shortly before an emission. No one has heard from them since... or so they thought, as later in 2011, very aggressive stalkers began storming the Barrier.[4][5]

Fact is, they had been "recruited" as the guardians of the C-Consciousness to repel stalkers, since they (namely Strelok's Group) have and will find ways to reach the center of the zone. They are vastly superior guards than the Mutants or Zombified Stalkers since they retain most of their humanity, although they are completely under the control of the C-Consciousness and will gratefully give their lives without question.

Their rank system and organization are almost completely unknown. What is known is that the Monolith is led by a single leader (Charon in 2012[6]), while combat operations are overseen in the field by Preachers, who snipe from atop buildings while chanting phrases out to inspire their men and demoralize the enemy. Both the leader and Preachers take their orders directly from the C-Consciousness.

The only squad identified by name is Crystal, a unit whose sole task is protecting the Monolith and the Sarcophagus[6].

Cut game data points to two units known as the Left and Right hands of the Monolith, armed with FN F2000 rifles and Desert Eagle pistols. These may have been ranks, honorifics or titles among the Monolithians.

It is suggested in dialogue with Clear Sky members in Limansk that the Monolith faction is extremely well equipped and have huge numbers compared to the other factions, putting them on level-footing with the Clear Sky faction. They use equipment developed by C-Consciousness or those acquired from the obliterated Clear Sky faction.

The Monolith throughout the series make use of nearly every weapon available, as well as high-end weaponry that most other factions either have no access to (such as the Gauss Rifle and FN F2000), or can only field in small quantities.

Thus, most of their weaponry is unique and unavailable to the player until near the end of the game.

It is unknown where Monolithians get their equipment, although Kirillov suggests they have agents who deal in smuggling with corrupt Military members.

Live Monolith can be first encountered in the Army Warehouses, near a crashed Mi-24 Hind helicopter west of The Barrier. They are well equiped and surrounded by a Psi Field which does heavy Psi damage when entered. The Monolith are uneffected by the Psi disruption and can be difficult to take care of due to the lack of cover. The next major apperance of the faction will be on the road to Limansk, and will be your main opposition.

In the final stages of Clear Sky, the primary opposition is the Monolith faction itself, having repelled all of the other factions attempting to break into the Zone center. It is here that it's first suggested (chronologically) that Monolith bolsters its numbers through the use of emissions, and later, via the Brain Scorcher. The ending shows the survivors of Clear Sky's raid being brainwashed via television screens, including Strelok and likely Scar as well.

Interestingly, what appears to be the corpses of dead Monolith soldiers can be found in the Swamps and the Cordon.

In Clear Sky, the Monolith faction has only three territories under its control; the Chernobyl NPP itself, the northern portion of Limansk, and most of the abandoned hospital where you progress to after Limansk. They become the main opposition to the player during the final portion of the game, but are relatively rare outside of these areas, appearing only in small groups in such areas as the Army Warehouses.

By 2012, the Monolith faction is considered to be the most powerful faction in the Zone by far, easily as numerous as the armies of Duty and Freedom, with advanced technology that not even the Military possesses. Their army is large enough to be military theater sized as they regularly launch raids from the center of the Zone, attacking the Freedom Barrier with forces consisting of occasionally 20 men, a relatively expensive strategy in the sparsely populated Zone. Their grip has extended from beyond the NPP, and they have established a headquarters in Pripyat, led by a figurehead known as Charon.

In all likelihood, the vast majority of the Monolith faction's troops are in fact former Clear Sky members, as well as Duty, Freedom, Military, and Loners who supposedly lost their lives in the Second and Third emissions.

Monolith appears first in the Army Warehouses area, where a large squad of Monolithians launch an attack upon the Freedom barricade. Afterwards, they take the role as the primary opposition once again, often deploying en masse to block Strelok from making any further progress. By this time they've established numerous checkpoints within the Red Forest and garrison the Brain Scorcher, having established a strong, well-fortified position within Pripyat. Elite units regularly patrol the city, and at the same time still more Monolithians protect Chernobyl NPP itself, along with the Sarcophagus.

By 3 Months later after the zone is open, the Monolith is slowly losing power – most of Monolith's outlying forces have either been destroyed, or gained freedom from the influence of C-Consciousness. One such squad, led by Strider, can be encountered by the player, and recruited into one of the other factions – supposedly a first in the history of the Zone. However, the remaining fanatics are still enough of a threat to decimate the survivors of Operation Fairway.

They first make their appearance as enemies inside the Pripyat Underground , where they launch an ambush on the player and his companions before they can make a break for the surface. This is the first appearance of snipers in the entirety of the game, taking advantage of numerous vantage points to snipe the player as he attempts to activate back-up power to the underground.

Once the player arrives in Pripyat, it's revealed that Monolith itself is slowly losing power, but is still a potent enough threat to have decimated the survivors of Operation Fairway. Of particular interest is a special weapon sighted in their possession, which Colonel Kowalsky sends a special ops team to confiscate. This mission is the first sighting of the Monolith Preachers, who make use of the rare and devastating Gauss Rifle. With the Preacher dead, the player then takes part in another mission, destroying one of the Monolith outposts in a bookstore – gunning them down while they pray. It becomes apparent that, while some of them maintain a connection to the Monolith (namely the Preacher and Monolith Fighter), the majority of them have lost this link and are left at the Preachers' command.

Afterwards, the player is relatively free to explore Pripyat, though Monolith maintains at least one stronghold – above the X8 Lab. Despite this, they're not seen outside of them because of the appearance of too many stalkers.

They serve as the main opposition during the finale, where at least two more Preachers make their appearance, trying to prevent the survivors of Operation Fairway from evacuating.

Monolith is comparatively decimated, declined in power and stature after the events of Shadow of Chernobyl. They only maintain barebone garrisons within three locations of Pripyat – one of which is quickly wiped off the map by the player. Despite this, they continue to receive reinforcements from Chernobyl NPP itself, and deploy what amounts to a small army in order to keep the player from evacuating survivors from the city. During free play, Monolith will only respawn by the Pripyat docks.

A group of Monolithians in S.T.A.L.K.E.R. Clear Sky capturing the Army Warehouses.

A dead Monolith stalker in the Cordon. 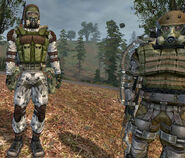 A pair of Monolithians in Shadow of Chernobyl. 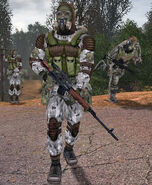 A group of Monolithians in SOC.

Retrieved from "https://stalker.fandom.com/wiki/Monolith?oldid=60847"
Community content is available under CC-BY-SA unless otherwise noted.