The Moonlight is an artifact featured in all three S.T.A.L.K.E.R. games.

Degenerate case of the activity of the Electro anomaly. It seems that such a wonderful round form is created when the anomaly is subjected to thermal influences. Expensive artifact.

Sakharov provides a (repeatable) mission to get a Moonlight, in exchange for 10000 RU and scientific medkits, or more rarely, a SEVA Suit.

The Moonlight is a rare artifact with four fixed placements within the Zone:

The Moonlight will only be visible and collectible between midnight and 5:00AM. Moonlight artifacts dropped by the player onto the ground outside this time frame will deactivate seconds afterwards, and will stay hidden until the proper time period comes up again.

In rare cases a Moonlight may spawn in the inventory of a Bandit veteran in the Wild Territory.

This unique electrostatic artifact can resonate under the influence of psy-waves. Stalkers have learned to fine-tune the artifact so that it resonates in opposite phase, thus absorbing psy-emissions. Emits radiation.

The Moonlight returns in S.T.A.L.K.E.R.: Clear Sky as an uncommon artifact providing a +3 in psi-protection and a +2 in radiation. The Moonlight can serve good purpose to players needing to go through psi fields such as the Symbiont in the Red Forest.

This unique electrostatic artifact can resonate under the influence of psy-waves. Stalkers have learned to fine-tune the artifact so that it resonates in opposite phase to the main source of emissions, thus fully or significantly neutralizing their effects. Emits radiation.

The Moonlight returns in S.T.A.L.K.E.R.: Call of Pripyat, now providing a +6 in psi-protection and a +2 in radiation. Considering the low amount of radiation and good protection provided, the Moonlight is very helpful against Controllers as the increased protection can reduce the damage dealt by psychic attacks and the surrounding psi-field. The player could also combine two of these to get a heavy +12 in psi-protection, making the use of Psy-blocks against controllers more or less redundant.

The Moonlight may be found in electrical anomaly fields; the Parking Lot anomaly in Yanov spawns one by default.

The Moonlight is also sold by Beard once the player completes the Compass mission. 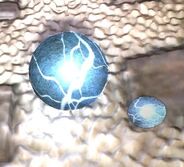 Moonlight artifact in Shadow of Chernobyl.