7200 RU Beard
The Night Star is an artifact featured in all three S.T.A.L.K.E.R. games.

This wonderful artifact is formed by the Springboard anomaly. The use of the artifact demands the neutralization of deadly radiation. Expensive and rare, this artifact is extremely interesting for scientific expeditions and other research activity in the Zone.

The Night Star is a rare artifact. It is possible to find at least one of these artifacts on the edges of Agroprom, however these areas have very high radiation levels. Baldy will reward the player with this artifact after completing his mission Kill the traitor. Two can be found around the Monolith structure in the Palace of Culture, and more outside the Chernobyl Nuclear Power Plant. Secret stash of Smoked in Lab X-18 contains one.

The Night Star returns in S.T.A.L.K.E.R.: Clear Sky, this time as a common artifact that increases the maximum weight capacity by 10kg and gives a +2 in radiation. Considering this low amount, one could combine several Night Stars to increase weight capacity, allowing the player to carry more gear.

This glowing artifact can generate a local directed low-gravity field. Widely used by stalkers along with Gravi, a similar artifact, to increase maximum load. Emits radiation.

The Night Star returns in S.T.A.L.K.E.R.: Call of Pripyat. It remains a common artifact but its weight effect having been reduced to +4kg, making the artifact far less effective, although the low amount of radiation make it somewhat effective to use with a single Jellyfish.

The Night Star may be found in gravitational anomaly fields; the Dredge Station in Zaton spawns one by default.

A Night Star can be looted from the body of a dead stalker in the basement of the Krug Antenna Complex, while exploring the building with Grouse during the Missing Stalkers mission. The body is behind a grate, beside the room containing the three bodies Grouse investigates.

Night Stars are sold by Beard once the player completes the Compass mission. 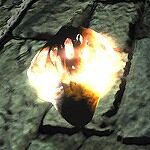