He explains his change of occupation as originally being one of Sidorovich's runners, eventually assembling his own list of contacts within the Zone and outside of the Zone in order to begin his own business securing high quality gear for the wealthy and well-to-do Stalkers. A curious note is that Nimble insists that his goods are fairly gained and are never salvaged from the deceased or stolen from the living. Despite this however he sells gear supposedly belonging to Wolfhound, who died at the hands of Strelok during the events of Shadow of Chernobyl. (note that during Strelok's encounter, Wolfhound is not actually carrying a UDP, so Nimble may have bought it.) He seems to have an over-abundance of UN equipment, as he mentions both the GP37 and FT-200M as being taken from failed UN expeditions, though these could have been sold to Nimble in exchange for his services out of desperation. Although when one orders another exoskeleton, he says that the places that made these suits are closed and the only other way to obtain an exoskeleton is to salvage it from the dead, which he strongly opposes doing. The player can, however, purchase another exoskeleton from Owl once they advance further into the game and meet certain achievements.

If the player orders all weapons from a class and attempt to buy more, he will apologize and state his reason why. (Example, if all his supply of sniper rifles has run out, he will say his "contact" has been "indisposed".) 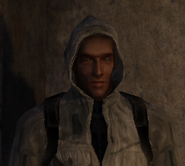 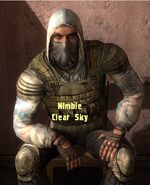 Retrieved from "https://stalker.fandom.com/wiki/Nimble?oldid=70765"
Community content is available under CC-BY-SA unless otherwise noted.