This pistol was developed in the second half of the 20th century on the basis of the PMm for use by special forces and scouting units. The front of the pistol's barrel is covered with an integrated silencer, while the bolt mechanism is short, which prevents a back-moving spring from being located inside it, and it is therefore situated in the weapon's handle. Morally obsolete, the weapon is still effective in the right hands.

A pistol with an integrated silencer, it was used by Soviet special forces. It is now outdated, but in skilful[sic] hands, still very effective.

The PB1s is a relatively commonly found pistol within the Zone, held by a fair amount of rookie Loners and Bandits all around the Zone, meaning one can easily salvage one in the Cordon by looting it from bandits. It can be bought from both Barkeep and Sidorovich and is relatively light weight and cheap. It can be also found in the following stashes in Cordon: Things by the bridge and The backpack is near the village.

Its performance is close to that of the PMm, as the weapon itself is a suppressed variant of the latter. As such, it offers poor performance and average durability, but it is still way more accurate than PMm. However the fact that this is the only widespread silenced weapon in the game can make it a valuable weapon for stealth missions unless the player possesses a Noiseless Kora or any stronger weapon with possibility to mount a silencer on it.

It is used as a sidearm by the following characters: Bes, Bullet

The PB1s can be tuned to be the most accurate handgun in the entire game, but ammunition used by it makes it weaker compared to other pistols. The PB1s also has the worst durability out of any weapon in the game as it will start to take damage after the player fires off a full magazine and takes slight damage for every magazine fully emptied. Its integral silencer is actually very effective in-game; for example, when stealthily engaging a group of enemies and killing one of them from a concealed position (preferably with a single headshot), the others will become alerted but will not detect the player if they remain concealed. In some cases, enemies might not react to one of their squadmates being killed with the PB1s, as shown in the video below.

The PB1s in Clear Sky is quite rare and not carried by any stalker in the Zone. It is only sold by Mitay once the player has joined Duty. However, it is contained in several stashes in the Swamps: Stash near bunker or in Carpetbag under stove.

It is almost identical to its Clear Sky counterpart, allowing to engage enemies in stealth way and killing them without any notice, although some may find use of ironsights harder than aiming with crosshairs as it is in Clear Sky. It has a fairly low rate of fire (average, but most other pistols can be upgraded for better fire rate), decent accuracy, low recoil, and low bullet flatness. As with its Clear Sky counterpat, it is a valuable stealth handgun to use as its integral silencer does not reduce the weapon's performance. However, the low damage per shot makes the suppressed March a much better stealth sidearm, as it can get a single headshot kill - and especially uses the much better .45 ACP ammunition, which is key for stealth kills.

The PB1s is rare in Call of Pripyat but not that hard to actually procure. The first specimen of this pistol can be found in a foot locker near Stingray 5's crash site in the swamp in Zaton, it is located near the chopper's tail on the island it's on. The others are held by the military survivors in Pripyat, more specifically, everyone in Captain Tarasov's strike team - considering Morozov's death is scripted, one can easily loot one from his body. Rarely, Expert Bandits may have it in their inventory. It also will be sold by Hawaiian if the player earns the "A Friend of Duty" achievement. 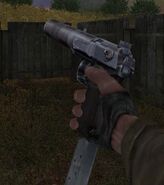 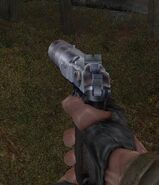 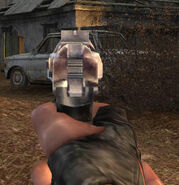