watch 04:21
Wiki Targeted (Games)
Do you like this video?
Play Sound

Oblivion Lost was the working title for a game GSC Game World began developing in 2001. It was supposed to be a futuristic team-based action game using their proprietary X-Ray (Engine).[1] This game was the original concept for the S.T.A.L.K.E.R. series.

Little is known about the storyline. What is known is that it was set in the future, featured an odd technological mix (autonomous bipedal robots appearing side-by-side with single rotor helicopters and real-life weapons) and various environments, from high tech facilities to ancient Aztec temples.

The player (based on Build 1098) would control either a space marine of sorts, named Jeffry, or a female soldier of the GOS (apparently named Barby).

The gameplay would feature vehicles, including the Apachetka, a futuristic speedboat and buggy. All of these would be armed and available to the player. 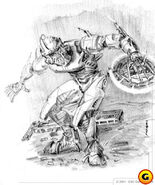 Military base concept art
Add an image to this gallery

Retrieved from "https://stalker.fandom.com/wiki/Oblivion_Lost?oldid=71501"
Community content is available under CC-BY-SA unless otherwise noted.