What are you, a statue? If you've got something spill the beans, if not take a hike.

Owl (Rus. Сыч; otherwise known as Sych) is a trader appearing only in S.T.A.L.K.E.R.: Call of Pripyat.

Owl is the trader and information dealer aboard the Skadovsk in Zaton. He is known to favor Sultan during conflicts between him and Beard.

Owl gives out three missions with one being an alternate quest. The first one, Mercenary Camp, requires the player to travel to the waste processing station in Zaton and bring back any information from the Mercenaries that reside there.

The second mission, Tempting Business, requires the player to bring three Veles detectors to Novikov so that he can make a more advanced detector for the player and for Beard's Loners. This quest leads into a conflict between Beard, Owl, and potentially Sultan in which the player is forced either to side with Beard or with Owl and Sultan.

Owl sells information that can help the player in various tasks and also buys most of the information the player can find in the game. He can provide hints on the whereabouts of Magpie, additional information on the crashed helicopters, and he provide a lead on obtaining poison gas which the player can use to purge the bloodsucker lair in Zaton.

The player needs to sell 10 different documents or PDAs to Owl to get the "Trafficker of Information" achievement.

Owl only has 1 ending:

He becomes a successful dealer of information in the Zone with rumors that he gives regular reports to the USS itself. This ending is obtained by attaining the "A Man of Balance" achievement by selling Morgan's PDA and General Tachenko's PDA to Owl and turning Flint in to either Gonta, Loki, or Shulga (without attaining the alternative achievements "Friend of Freedom" or "Friend of Duty").

"What are you, a statue? If you've got something spill the beans, if not take a hike."

"So, you got anything new?" 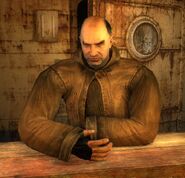 Owl by his desk in Skadovsk in Zaton
Русский Українська
Community content is available under CC-BY-SA unless otherwise noted.
Advertisement