The PMm first appears as early as Build 1154. Statwise, it's not too far from its final incarnation in the series. It takes up the 2nd slot in the then non-existent inventory system.

The most widespread pistol in the Zone. It is a legacy of the Soviet era. It is relatively reliable and cheap, has low magazine capacity, low power and an unsatisfactory grouping of shots. It is the main weapon of a beginning stalker.

The player is given this weapon at the beginning of the game by Wolf, when they are sent by Sidorovich to rescue Nimble from a group of bandits, and becomes the player's main weapon until they manage to get a primary one - usually a Sawn-off dbl barrel from the aforementioned bandits. The PMm has the advantage of using a very common type of ammunition - 9x18mm. Statwise however, it is mediocre, having fairly low damage, accuracy and mag capacity.

The PMm is now reasonably powerful and can rival the performance of some 9x19mm pistols, as it's cheap to maintain and most upgrades cost less than 200 rubles, making it more useful later in the game than in Shadow of Chernobyl. Since it weighs less an a kilogram, it  is a good sidearm for those only wanting a last-resort backup weapon.

However, its usefulness is limited by its low accuracy, damage, and average magazine capacity. Its handling and durabilty also aren't too out of the ordinary, even with upgrades.

The PMm is given by Docent Suslov along with some other equipment at the beginning of the game. The weapon can be bought from every trader of all factions and held by rookie loners, bandits, Clear Sky members, soldiers and Duty stalkers. Overall the weapon is pretty widespread and it's very easy to acquire one.

The PMm shares the same upgrades as all pistols, albeit they're much cheaper.

This Soviet legacy is the most common pistol in the Zone and is one of the best compact self-defense handguns available. It is small, highly reliable, easy to use and maintain in working order. It also suffers from several drawbacks, including its short range, low firing accuracy and poor stopping power, while also losing out to modern pistols in its class in terms of weight and magazine size.

In Call of Pripyat, the PMm is stats-wise roughly the same as its Clear Sky incarnation, being far from the best but not a complete waste either due to its light weight and reasonable stats for a dedicated sidearm.

The most notable thing about it is the fact that loners, bandits and zombified stalkers (previously all common users of the PMm) have all adopted the Kora-919 as a rather common sidearm alongside the PMm, making the latter rarer among stalkers but still easy to obtain overall. The Spetsnaz also do not use the pistol as they all prefer the more modern Fora-12 and the specialized Noiseless pistol (PB1s).

The weapon can be bought from both Owl and Hawaiian at a very cheap price and four of these pistols in perfect condition can be found in the Yanov AA complex's armory, among other things. Rookie and experienced Duty stalkers are also known to carry this weapon as their sidearm.

The PMm's upgrades are a centered around making it more accurate or durable, or have better RoF or handling.

Also it's worth to note that PMm can be lightened to have a ridiculously low weight of 0.15 kg (unloaded), so it may be good to have it in the inventory as a last resort weapon or/and to have it when wielding very heavy weapons, like Zulu's RP-74. 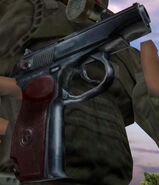 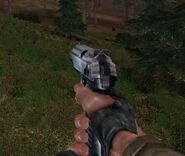 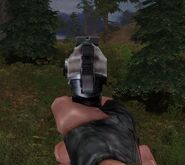 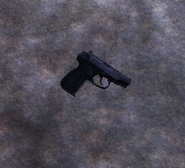 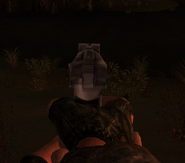