This modern version of the Duty bodysuit is better suited for stalker recruits who are used to lightweight suits. Unlike the PSZ series, this suit provides good protection against anomalies while also being capable of stopping a pistol bullet. The suit cannot be modified with an artifact container, but may be upgraded with a combat support system instead.

This suit is a modernized version of the standard Duty suit, providing good anomaly protection, unlike the PSZ series suits. Its bulletproof vest can stop a pistol round or two.

This suit is typically issued to Duty recruits and rank-and-file members. Higher ranking Dutyers will usually opt for either a PSZ-9Md Universal Protection suit or a PSZ-9d Duty armor suit.

This suit has a rather high price tag. This suit has similar protection to the CS-3a Body Armor, which weighs 2.00 kg less and comes with an artifact container, unlike the PS5-M suit.

The PS5-M shares the same upgrade tree of the Sunrise suit, allowing one to choose between anomalous protection upgrades or combat-related protection upgrades. And like all Tier 2 armor, it does not come with a Night vision module.

For a combat suit the starting bulletproof protection is surprisingly low, half of that of Berill-5M armoured suit. True to Duty faction's mentality, it has no artifact containers nor can it be upgraded with any. It could be a nice alternative for the Sunrise suit and Beril, but by the time the player arrives in Yanov they will most likely have something better.

It can be bought from Hawaiian after completing at least two missions for Duty, or found in Duty's secret stash in Yanov after giving either Shulga or Loki Morgan's PDA.

The PS-5M has three upgrade paths and this is the only suit in the game with no anomaly protection upgrades whatsoever; Instead, the upgrades focus almost exclusively on increasing the hit protection, as well as the standard among low-end suits weight reduction and increasing carry weight. 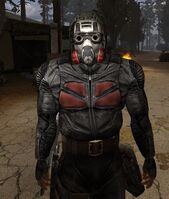 An experienced Duty soldier wearing the PS-5M in the Garbage in Clear Sky.