The PSO-1 scope is a magnified optical scope with a x2 magnification. The PSO-1 can be mounted on any Soviet or Russian made weapon such as the Akm 74/2 and the AC-96/2, and features the same magnification as the SUSAT Scope. Although unlike the SUSAT the PSO-1's view includes a more visible drop compensator system which, assist with shooting at distant targets.

The PSO-1 scope is mounted on the SVDm-2, but in-game can be mounted on any Warsaw Pact rifle or assault rifle. However, in Clear Sky and Call of Pripyat upgrades might be necessary in order to mount the scope.

A widely used Soviet scope. The scope can be mounted on a weapon using a dovetail mount used by the Warsaw Pact countries.

The PSO-1 scope can be difficult to obtain in the beginning both Shadow of Chernobyl. Bullet will give the player a PSO-1 Scope if the player assists him on his ambush against the Bandits in the Dark Valley. The box in Borov's office may contain the scope. Mercenaries in the Wild Territory use the PSO-1 scope on their Akm 74/2s, and some Loners in the camp in the Army Warehouses use this scope, such as Smartass. The Military begin to use it in the Red Forest, after disabling the Brain Scorcher.

The scope may be found in the following stashes:

One PSO-1 scope is on a tower in the Swamps northeast of the Fishing Hamlet, in an open box. Several Duty members use it, and it can be purchased from most traders in later parts of the game.

Standard x4 PSO-1 scopes can be found attached primarily to Dutyer rifles, as well as most Monolith and military soldiers using the AN-94 or AS VAL. Other versions are also available from traders. As usual, they don't give the weapon attached any bonuses aside from different sighting. 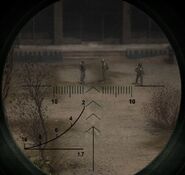 The view through the PSO-1 scope.

The PSO-1 scope in Build 2002 in the early stage of development.

The overlay of a NSPU-3 scope