The Palace of Culture, also referred to as Monolith Headquarters, is a location in Pripyat featured in S.T.A.L.K.E.R.: Shadow of Chernobyl.

The "Energetik" Palace of Culture was one of the 137,000 Palaces of Culture built within the U.S.S.R. It was designed as a focal point for people to enjoy a range of recreational and artistic activities all under the banner, quite literally in many cases, of political propaganda. Pripyat’s Palace of Culture included a cinema, theatre, library, gymnasium, swimming pool, boxing/wrestling ring, dancing and meeting halls and even has a shooting range in the basement.[1]

Located in the center of the city, the Palace of Culture is among the most iconic landmarks of the city, as a remnant of the art and Soviet propaganda from the 80s.

The Palace of Culture was turned into the Monolith main headquarters in the city of Pripyat. Located in the center of the map, the Palace of Culture is a heavily protected location, with snipers standing on the front balcony, and many experts and veterans protecting the inside of the building. The square in front of the palace is relatively empty, although it is not uncommon to see groups of snorks roaming the area.

The building has three floors:

There is some interesting loot in the building. There is a Monolith suit in the basement, on a crate near Charon. As well, Charon has a rare Vintar BC that could help the player for the final levels, although it is very unlikely to be in perfect or good condition. There are also several artifact placements around the Monolith structure, which include a Moonlight, a Kolobok and two Night Stars.

Raiding the building takes some time and ammunition, as the player will have to face no less than 20 enemies. However, the Palace of Culture is entirely avoidable - the player could simply go through the right and left lanes to avoid the Monolith experts guarding the area.

The Palace of Culture is just south to the Stadium, west to the Ferris Wheel and the Hotel. 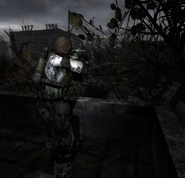 Sniper on the balcony

Retrieved from "https://stalker.fandom.com/wiki/Palace_of_Culture?oldid=62308"
Community content is available under CC-BY-SA unless otherwise noted.