Nothing. Quiet as a grave. The leader nodded and opened the door. As soon as they shined their lights into the room they were met by a hailstorm of cinder blocks, teapots and other household junk.

A Poltergeist is a type of mutant featured in all three S.T.A.L.K.E.R. games.

Supernatural in the eyes of some, invisible creatures haunting the deeper reaches of the Zone, usually haunting old, abandoned buildings. Nothing is known about their origin, although rumors in circulation claim they are spirits of stalkers hit by a massive wave of radiation. Their mysterious appearances and disappearances seem to correspond to the poltergeist legend, hence the name. Known encounters with poltergeists are quite diverse in fact: from mischievous laughter and blood-chilling howling, to deadly fireballs appearing out of nowhere. Unfortunately, all information about the poltergeist phenomenon originates from unclear and contradictory stories of questionable validity.

Poltergeists are extremely deceiving for rookie players as they do not appear threatening; they only appear as a ball of electricity. However they can be killed with conventional weaponry just by shooting at the ball of lightning. Poltergeists will attack with anything that's not tied to the ground by utilizing their telekinetic powers to throw objects at the player (e.g., buckets, barrels, ammo boxes, crates, discarded firearms). However, it can also be that they can manipulate gravity similar to that of Vortex anomalies.

Poltergeists are relatively annoying, but pose no greater threat to the player. The flying junk does only very light damage. Unlike in the two later S.T.A.L.K.E.R. games, in Shadow of Chernobyl, Poltergeists do have a physical body, which seems humanoid although consisting only of top half without the legs of what would have been a regular body. It can only be seen after killing this creature, and killing it is an extremely easy task. A Poltergeist isn't a real bullet absorber, taking 5-10 shots from an AKM-74/2 type weapon to kill. Just shoot slightly above the center of the electric cloud. One tell tale sign of a Poltergeist in the area or near to the player is the blueish fuzzy tint around the player's vision. While alive, it appears nearly identical in all three games.

During the player character's trips to the labs of X-16 and X-18, one can see the deformed bodies of what appears to be infants in stasis tubes; it can be theorized that those creatures are Poltergeists still in infant stages.[source/verification needed] Poltergeists are particularly found in Lab X-18, adding an eerie and frightening atmosphere to this laboratory contributing to its nearly legendary fame. They may also surface to the Wild Territory, Army Warehouses and Dark Valley in unpatched or older versions of the game.

In Clear Sky, Poltergeists can be found inside the abandoned mine at the Red Forest during the mission to find the Compass. If one goes deep into the mine, they will see that a section of the ground is covered with wooden planks; without a careful step, one may fall into the pit and be faced with several Poltergeists. Unlike the first game, the Poltergeists are stronger, capable of withstanding more damage, and their attacks are powerful enough to kill even a well-protected player. When disturbed, their telekinetic powers are not confined to the lower mine but extend to the upper mine with objects flying about. Unlike in Shadow of Chernobyl, Poltergeists do not revert to their true form when killed.

Two Poltergeists with powerful psychic abilities are found in an abandoned mine shaft in the Red Forest. They are very deadly, as their throws of assorted objects can result in more than 50% damage per hit to one's health; even while wearing high-end armor. They are also near a rare Bulldog 6 and a quest item from a Duty or Loner squad leader.

In Call of Pripyat, Poltergeists are back to normal. They also seem to have much less health, but this is partially offset by the fact they're rather hard to aim at. Most importantly, they have lost their ability to see and instead now sense movement. By walking or crouching, the player can remain completely undetected; hitting a Poltergeist once will usually not be enough to fully alert it (use low crouch to be sure), allowing the player to easily take it out even using nothing but a Hunting knife. For long ranges, less than 5 shots from the SVD can take it down, provided they directly hit the fast-moving ball of lightning (the screen will go blue if the player lands the first hit). As in Clear Sky, Poltergeists do not revert to their true form when killed.

The only respawn point for Poltergeists is the Iron Forest in Zaton, where one constantly spawns around the Stingray 2 crash site. Otherwise, the player will encounter only a few during the storyline: the first is located inside Lab X-8 and on random occasions will attack the player. At least one is encountered in the Kindergarten during the Radio interference mission - one will automatically spawn while progressing inside the building, and hanging around the area might cause more to spawn. 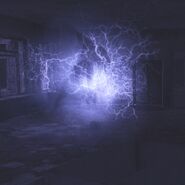 A Poltergeist in Call of Pripyat in Pripyat's Kindergarden

Player view when a poltergeist is near. 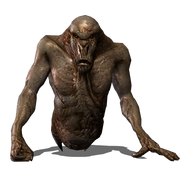