A tailor-made pump-action shotgun which used to belong to Trapper. The hunter's only requirement in respect of his weapon was that it needed to kill predators in one shot. This philosophy was based on the belief that no matter how many people an animal had killed, it was still just an animal, and thus should not suffer.

The Predator is a special Chaser 13 shotgun. It is featured only in S.T.A.L.K.E.R.: Call of Pripyat.

This shotgun is almost identical to the Chaser 13, although it boasts a huge damage increase (it is the only shotgun that does more damage than the Eliminator), and a slight upgrade to rate of fire.

It is easily among the best shotguns of the game. Due to its high damage per shot, it is the best shotgun to use against mutants, especially with a full-auto upgrade. It is still effective against NPCs, although one may prefer to use the Eliminator as it offers better fire rate, and is better to use with Slug rounds due to higher accuracy and ability to mount a SUSAT scope.

It is awarded to the player by Trapper after the player slays the Chimera near the Ventilation Complex, along with being awarded the Mutant Hunter Achievement.

A bug has been found that allows the player to reload the weapon indefinately, allowing several hundred rounds to be loaded into the magazine. Interrupting the reload will disallow further reloading untill the extra ammo has been spent. 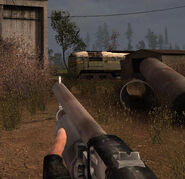 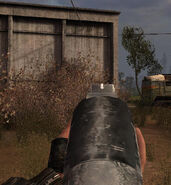 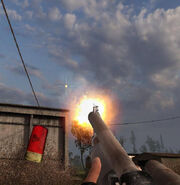 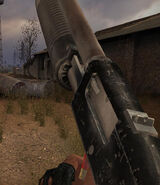