Leap at the enemy

Pseudodogs are a relatively common type of mutant descended from wolf, bear, and human DNA strains, while only resembling dogs visually. Unlike their relative the Blind dog, which is clearly a side effect of random mutations, Pseudodogs are thought to possess experimental breeding history, with their possible origins tracking back to way before the second disaster.

As their name suggests, they look more like dogs than wolves; they have very blunt and short muzzles, relatively short fur (but far more than a blind dog) and are unusually small for a wolf-related canine as they are only slightly bigger than blind dogs. They have some exposed skin on the ribs which is not covered by fur, and their cheeks do not completely cover their teeth (or they are constantly snarling). Also, pseudodogs have rather small ears which do not stick straight up which is also very different from most wolves. Another distinguishing feature are their eyes, which implies that they can indeed see (unlike blind dogs). A pseudodog's eyes are a glowing, whitish yellow color remarkably similar to a Bloodsucker's. Curiously, they stop glowing when it's badly injured or killed.

Pseudodogs are often seen together with Blind dogs, though the former are faster, stronger, and more aggressive than their blind relatives. Pseudodogs are viciously territorial and will not hesitate to attack intruders. They fight by lunging at a victim and then use their teeth to wound and incapacitate. In addition, they can throw their victim several meters into the air. A pseudodog is a serious threat, even to a well-armed Stalker. Strangely enough, if the Pseudodog is killed and it is accompanied by a pack of Blind dogs, the blind dogs would most of the time back off and retreat, which might indicate that these creatures have a type of pack mentality and the Pseudodogs act as pack leaders. Because Doctor managed to tame one of these beasts, it's highly suggested that these creatures still fully or partially retain their instincts, as wolves are normally tamed by men when either an act of kindness has been introduced to them or overpowering them and showing who the superior being is. Pseudodogs are also still capable of reproduction as Pseudodog pups were confirmed to have been seen in Call of Pripyat during Noah's ending. The offspring closely resemble their parents which means that the Pseudodog's genetic makeup has been permanently altered by the zone, but is stable enough to produce consistent results from a reproductive standpoint.

Several pairs of Pseudodogs are found in the Cordon. After that they become prevalent in the Dark Valley, the Army Warehouses and the Rostok factory area though in rare cases they may be found elsewhere.

Pseudodog are more prevalent, where they travel in packs and attack with fearsome prowess. They are found in the Garbage, Agroprom research institute grounds, and the military warehouses, but they are very much prevalent in the Red Forest.

Pseudodogs are commonly found throughout Zaton and Jupiter. In Pripyat, they are mostly congregated around the grocery store but may spawn elsewhere. Unlike in the previous titles, they can generally be found hunting alone, but are sometimes found in packs or running among blind dogs. Their AI pathfinding routines have been improved compared to previous games, and they are also capable of attacking while running, making them even more dangerous than before.

In Zaton, Noah has tamed a pseudodog named Lassie, which helps him guard the Ark against intruders. 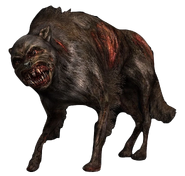