Edit
watch 01:54
Arcane: League of Legends - The Loop
Do you like this video?
Play Sound

The two remaining men started to run, seeing no chance to kill the creature. Dropping a PDA beacon entitled "VERY DANGEROUS AREA - STAY AWAY" they quickly left the area, as the giant started to drag the two bodies back into the factory.

The Pseudogiant is one of the rarest and most fearsome mutants in the Zone, appearing in S.T.A.L.K.E.R.: Shadow of Chernobyl, S.T.A.L.K.E.R.: Clear Sky and S.T.A.L.K.E.R.: Call of Pripyat. It has developed incredible strength, inhuman resilience, and a grotesque form which heavily deviates from human-based mutations.

The pseudogiant resembles a massive, drop-shaped abdomen with a pair of disproportionately large limbs. The limbs are arms and legs at the same time. The creature uses them to move around and grab its victims. An adult pseudogiant can weigh up to two tons and stand 2 meters tall. Their clumsy appearance might be deceiving, since they can move very rapidly if needed. Their muscles are exceptionally powerful and their bones are as hard as steel. The creature's brain is protected by a sturdy (up to 10 centimeters thick) skull, while many complex functions are controlled by the spinal medulla. Another astonishing feature of the beast is its ability to create local shock waves, which damage all living things in the vicinity.

Pseudogiants are very unique in the Zone's fauna, as they seem to be heavily-mutated humans. Pseudogiants are incredibly tough enemies which can withstand large amounts of damage before being killed, and are very dangerous to unprepared stalkers due to their ability to deal a large amount of damage when it attacks.

The Pseudogiant uses four attacks: a headbutt; a swing/grab with one of its muscled arms; a surprisingly effective stab from its smaller, clawed arms; and a ground pound that creates a damaging impact shockwave. The first three attacks can be avoided by being out of range, and the last area-of-effect attack can be avoided by jumping just before it pounds the ground, which can be a bit tricky - this does not apply to Call of Pripyat.

The player will most likely first encounter the pseudogiant in Lab X-18 as it guards the room where a ecologist body that must be searched for a door keycode is found. The player will encounter another creature in the tunnels below Lab X-16, and three will be in the Pripyat Stadium, though it is likely they will be caught by the whirligigs in the area and die before they could pose a threat to the player. Pseudogiants may respawn randomly in the Dark Valley, Wild Territory, Army Warehouses and the Red Forest, but this is relatively rare.

Pseudogiants in Shadow of Chernobyl are not as hardy as their later incarnations, but are still amongst the toughest mutants in the game. Also a consideration is that most of the Pseudogiants appear relatively early in the game, before much of the game's end-tier gear is made available, forcing the player to make do with lower-end weaponry and armor. The Fast-shooting Akm 74/2 that can be found in the Agroprom Underground is surprisingly effective against pseudogiants as one or two magazines will be enough to kill it, and the weapon's fast fire rate will prove to be very helpful during the fight.

Fortunately, however, with some quick maneuvering, the player never actually needs to fight any of them and may escape the areas they spawn in before they get in close enough to be a problem.

There is a Pseudogiant atop a hill in the Agroprom, that the player will have to fight most likely to recover the Ripper shotgun that the creature guards, as part of a side mission. One or two can be found at the Red Forest near the Symbiont anomaly.

Pseudogiants are made a lot more resilient, easily capable of shrugging off repeated salvos of high-powered bullets and explosives in higher difficulties before being brought down, although a direct hit from an RPG-7u will instantly put it down if Scar acquires a usable one. It isn't especially clear whether headshots inflict more damage or not, considering their thick skull. In general, firing at their head is the best way to kill them, but players who are exceptionally skilled with grenades can do a lot of damage.

Pseudogiants in Call of Pripyat gain the ability to hurl objects at the player with their attacks, and are one of the mutants granted a special scripted attack – capable of knocking the player down onto the ground, and dealing heavy damage with a follow-up attack. This, if it connects, can often outright kill a poorly equipped stalker, but it also seems to require the player be either standing still or immobilized by a shockwave.

Pseudogiant's resistance to weaponry has been further increased in Call of Pripyat. They are the toughest mutants in the game, even more resilient than the deadly Chimera. On Master difficulty, they are so tough that they can take about 2-4 Gauss Rifle shots, and they can survive even direct hits from an RPG-7u, while the ground pound attack can deflect the rockets if used at the right time. Reliably taking one down with standard assault rifle ammunition takes hundreds of rounds - on the other hand, it only takes around 60 buckshot rounds to do the same, although the lengthy reloads on most shotguns make this a difficult and dangerous task. An RP-74 upgraded with a 200 round belt box magazine with enough 7.62x54mm PP rounds is a good choice. Surprisingly, pistols can also work well: even on Master difficulty, a bit under 200 .45 ACP Hydroshock rounds will kill a Pseudogiant.

Despite their resilience, Pseudogiants appear to be more territorial than offensive. They typically will not pursue a target more than a short distance before abandoning the chase and falling back, only attacking when another target gets within range. The Pseudogiant also may retreat from a battle after having lost only about half or even a fourth of its health. Such events bring into question the nature of the creature, as despite its gigantic strength, fierce appearance, and viciousness in combat, it's not as relentless and persistent as more predatory mutants like bloodsuckers and chimeras.

Lastly, every Pseudogiant emits large amounts of radiation, often enough to induce at least minor radiation poisoning just by getting within range of attack. This radiation emission persists even after death.

The first (and only) scripted Pseudogiant will occur in the Testing Workshop. It is located in a testing room on the other side of the Documents concerning item 62 room. Its shockwave can knock Degtyarev off the walkways and railings above if the player attempts to use them to get around the giant. As such, the player is likely to kill the beast before acquiring the documents. Afterwards, they will spawn randomly (though quite rarely) in Yanov once the player has returned the Gauss rifle to Cardan.

A Pseudogiant and a Chimera. 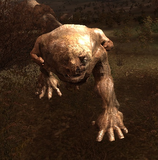 A Pseudogiant on the assault.

A closer look at a Pseudogiant's face.

A dead pseudogiant at close proximity.

Pseudogiant in the Dark Valley

Pseudogiant in the Dark Valley