The Psy-dog is a term used to refer to a special type of Pseudodog. Psy-dogs appear in all S.T.A.L.K.E.R. games to date.

It resembles a Pseudodog but with white fur and shares many characteristics with its somewhat more common relative.

The most distinguishing feature of the psy-dog is its ability to affect human minds, where it is able to create seemingly live images of itself. These even seem real and solid, as players cannot simply walk through them and must be shot to be removed. Although they also attack, they deal no damage, but can mask the direction of the real Psy-dog who is attacking you.

It can be theorized that the psy-dog can either manipulate the minds of man similar to the abilities of a Controller, or they themselves generate psy-emissions and are able to bend it to their will.[source/verification needed] When around the influence of a Psy-dog also, the player's vision is slightly brightened, has a few traces of noise in the vision and hears a familiar sound that is also done by Controllers when around them.

Psy-dogs typically do not directly attack, but instead rely on their generated illusions to swarm and overwhelm prey then attack. Once an unlucky prey is swarmed, the psy-dog will now usually close-in for the kill, who is masked along with the number of images that are also attacking.

Psy-dogs prefer to summon illusions to attack enemies and retreat. The real psy-dog rarely attack, being usually separated by their copies, and only appear if all of their illusions have been "killed", just to produce more false copies. This continues into a cycle until the perpetrators are finally killed.

Psy-dogs can be found in the Red Forest, but rarely they also appear in the Bar area. They stay deep in the forest or near the Brain Scorcher. They do not go onto the main roads.

The player's first psy-dog encounter is likely to be in the Dark Valley, where Lingov hands out a quest to kill a mutant which has been terrorizing the base. Though referred to by the commandant as a pseudodog, the monster turns out to be a psy-dog. Killing it may be tricky for both new players and veterans, as there is no way to determine which of the visible dogs is the real one, and which ones are merely mirages. Shooting a fake dog causes it to disappear, after which a new copy is quickly spawned. It is easy to sneak up on this one however, and kill it before it creates live copies of itself. If the original one is killed, all the images disappear. Another psy-dog appears in Yantar and more appear in the Red Forest.

It can be useful to use the minimap to look for the red dot to target the real one.

Due to the improvement on the A-Life and adding in random occurrences, psy-dogs can sometimes randomly be found in the deeper parts of Yanov, Jupiter and Pripyat. There are also two scripted encounters, two inside the Jupiter plant near the crashed Stringray when you enter the room, and one at the Oasis once the Heart of the Oasis is plucked from its branch.

As in previous games, each illusionary psy-dog can inflict significant damage when they attack, more than that of a normal strength Pseudodog. In fact, avoid getting even the images from getting close to you; the psy-dog's premier tactic is to drown you in fake images of itself then flank you while distracted, trapping you between it's jaws and the wall of fake dogs. Try to get to higher ground where you will have the advantage of elevation and sight. 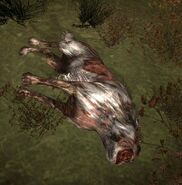