The Pyrogeist is a term for a special version of the Poltergeist, appearing in S.T.A.L.K.E.R.: Shadow of Chernobyl, Clear Sky and Call of Pripyat. They lack human form completely and are rather rare in-game.

Appearing as a floating form of heat haze surrounded by a fiery glow, the Pyrogeists appear a lot like their telekinetic cousin. They are easily distinguishable from the latter with their orange glow instead of blue. On death, they explode in a mess of blood and fire somewhat similar to the way Poltergeists die in the later two games.

A Pyrogeists' primary and only attack is spawning pillars of fire, similar to Burner anomalies. While hard to shoot or aim at and being generally quite fast, they are far from invulnerable. A couple of shotgun blasts at close range or a couple of magazines from an assault rifle are usually all it takes to get rid of these mutants. It's an interesting note that despite not using telekinetic attacks like the more psychic Poltergeist, Pyrogeists are still capable of immense psychic prowess. For Pyrogeists are able to impede the player's progress by blocking off paths with a psychic wall or jamming a door telekinetically.

The first Pyrogeist the protagonist encounters is in lab X-18, in the main laboratory where it blocks the main exit door with it's psychic abilities which can only be broken by killing the Pyrogeist. More appear in the Monolith Control Center, guarding the C-Consciousness hologram. However, the latter can be avoided by staying outside of the room in which they inhabit.

Four Pyrogeists make an appearance in the Agroprom Underground, guarding the exit. They block the final part of the staircase with some sort of psychic shield, which makes it difficult for the player to progress until all of them are killed. A gun (shotgun is best) can be used to kill the lowest Pyrogeist, the player can then go up the stairs a little way and kill the next one and so on up. An easy method of killing the Pyrogeists is by throwing grenades near them or use a grenade launcher for better results.

One Pyrogeist spawns inside the Circus Anomaly in Zaton. It's largely ineffectual - a player can snipe it from afar without being hit once, as the Pyrogeist normally spawns wedged in between three anomalies. They do not appear anywhere else, and while the Pyrogeist respawns, it may take up to an in-game week to do so. While their attack is significantly more dangerous then a normal Burner anomaly, just like Poltergeists they rely on movement to see so creeping in for a kill with a Hunting knife is very much possible (their death explosion does no damage).

Fire effects of the Pyrogeist's attack 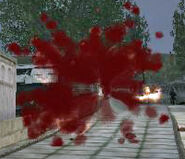 The explosive death of a Pyrogeist
Polski Русский
Community content is available under CC-BY-SA unless otherwise noted.
Advertisement