This belt-fed machine gun is a portable modification with a complex two-stage feeding system. Despite its weight and low precision, this LMG has found admirers in the Zone. Used primarily to fight off outnumbering enemy forces during faction conflicts and clear out mutant lairs

The RP-74 was first introduced to Clear Sky. Acquiring the weapon can be very difficult, but this weapon is a standard gun for Duty experts. The player will also receive the weapon for completing the Duty faction war (by destroying the Freedom base), and it will be sold by Mitay once the player has joined Duty. Two RP-74s are found in Limansk, one is held by the Bandit minigunner and another is used by a Military expert half-way during the level.

The RP-74 has interesting downsides, such as:

The weapon, despite these disadvantages, has a very high damage per shot and a moderate fire rate of 600 RPM, allowing one to take down a foe quickly. Because of the high damage per second, the RP-74 is a good choice against both enemies and mutants.

The RP-74 however has other drawbacks as the recoil is very high, accuracy is average, handling is mediocre and the weapon is relatively heavy. The lack of ability to aim is a severe downside as it makes the weapon overall inaccurate at long range, prompting one to fire in short, controlled bursts at targets at long range. Considering one cannot run with the weapon, it is ineffective if the player needs mobility in a firefight. Should the player fire from a single position, the RP-74 is a very powerful weapon; otherwise considering the lack of mobility it is advised to use another weapon, or at least switch to a pistol should the player need to move. The RP-74 is also quite unreliable and will often suffer from jamming after being used enough.

The RP-74's fire rate can be significantly increased, making the weapon far more powerful - with all fire rate upgrades the RP-74 can fire at a deadly 1200 RPM, and the fire rate +50% upgrade will give a slight increase in accuracy. The magazine capacity can be increased to a whopping 200 rounds with an upgrade, recoil can be decreased by 50%, and an upgrade will improve mobility by decreasing the weapon's weight to 6.5kg, among others.

Clear Sky also features a mounted variant of the weapon. Such weapon is seen at the Military checkpoint in the Cordon, in the north-western part of the complex. This variant is remote-controlled and will open fire on the player should they approach the checkpoint from the north or the west - most notably the player will come under fire from that turret when they leave the Great Swamp for the first time. The second and third turrets are seen at the Limansk Hospital, used by Monolith fighters - the latter two are rendered inactive once the Monolith machine gunners are killed. By default this variant fires at 900 RPM but features a lower damage per shot, 60 instead of 100, but is still deadly enough.

The RP-74 returns in Call of Pripyat.

The most common source for the weapon is Hawaiian after completing the A Friend of Duty achievement and Zombified Stalkers experts wearing exoskeletons. The RP-74 is one of the four weapon they can spawn with, the others being the SGI-5k, the Tunder S14 and the SPSA-14.

There is one at the top of the Vine in Pripyat, hidden next to a sofa inside an apartment. The climb is difficult and hindered greatly by the heavily damaging moving chemical anomaly running across it. Hawaiian sells the weapon after the player obtained the A Friend of Duty achievement. One is in Lab X-8, right next to the Poltergeist in the top room, loaded with 27 rounds. Exoskeleton-clad Duty experts around Yanov may sometimes carry this weapon.

For the most part the RP-74 is reminiscent from its previous counterpart, although damage and fire rate are lower, and the weapon can now fire in semi-automatic in addition of the default fully-automatic fire mode. The RP-74 still suffer from movement penalties, and one can still not aim down the sights of the weapon. It can take up to five seconds for the crosshairs to reach their normal, deceptively accurate spread. Fired on the move, the RP-74 even less accurate than an SVDm-2. As well the RP-74 has low reliability and while it will not jam as much as in Clear Sky, it will quickly degrade. Upgrades will be a massively expensive endeavor – for a gun that one can usually sell for only 8000RU at the most, upgrading just one of the four upgrade trees can cost 12000RU.

The RP-74 has a good amount of upgrades that serve good purpose. With fire rate upgrades the weapon can fire at 925 RPM. The weapon can be modified to use 200-round magazines, and the accuracy can be highly improved. Recoil can also be highly decreased and handling can be improved. These upgrades can severely affect the weapon's performance and make it much more effective.

First person view of the RP-74 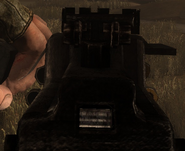 Iron sights if activated through modding

Mounted RP-74 in the Limansk Hospital