The suit is the pinnacle of personal protection technology. It is composed of three elements - a tactical helmet, a heavy armoured vest and reinforced jumpsuit. The tactical helmet encloses the entire head, covering the cranium with a thick armoured helmet, the face with a specially made gas mask with external filters and a cloth cowl covering the neck and ears.

The vest is the bulkiest and most striking element, as it consists of several thick layers of kevlar and can be reinforced with composite or titanium plates for increased protection. It is also integrated with a back mounted chassis, to which the exoskeleton is attached.

The jumpsuit itself consists of a battle dress uniform (colour and camo pattern varies from faction to faction) reinforced with armoured plates protecting the limbs of the user. They are typically worn with armoured, heavy boots and thick gloves.

The radiation suit appears to have been lightened to allow it to be worn without mechanical Exoskeleton assistance, as it does not provide as much protection as a full Exoskeleton armor, allowing the wearer to survive less than half as much overall damage as an Exoskeleton wearer. It is still one of the toughest armors available in the Zone, significantly exceeding the Spetsnaz Berill-5M armoured suit and being second only to the Military Stalker "Bulat" Skat-9 military armoured suit (and its Duty equivalent, the PSZ-9d Duty armor) in terms of non-Exoskeleton protection.

The pattern depends on the faction.

Veteran Monolithians may be found wearing just the radsuit, without the exoskeleton.

Veteran Loners and Monolithians may be found wearing just the radsuit, without the exoskeleton. 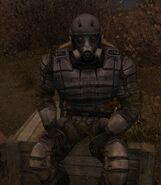 Monolith radsuit in Call of Pripyat