A dreadful place. Easy to vanish without a trace there, no matter how lucky you have been in life so far. Whoever gets close to the Brain Scorcher immediately goes insane, turns into a zombie and starts stalking the Zone restlessly. A human shell is all that's left. No-one has ever returned with a sound mind.

The Red Forest is a woodlands area north of the Army Warehouses. In the game as well as in real life, it got its nickname from the 1986 Chernobyl disaster which killed all the trees and turned their needles a bright red colour. It has appeared in S.T.A.L.K.E.R.: Shadow of Chernobyl and S.T.A.L.K.E.R.: Clear Sky.

The Red Forest is accessible by the player after they get the Psi-helmet from Sakharov, which protects them against the Brain Scorcher's psi-emissions. The main objective there is to disable the Brain Scorcher in the Lab X-19 in order to gain access to Pripyat.

The Red Forest is dominated by the Monolith faction which has set up outposts on most of the road to the Brain Scorcher. The forest area is occupied by snorks, psy dogs, zombified stalkers, blind dogs, and bloodsuckers.

The Red Forest is a dangerous area - not only most of the time the player will have to shoot their way towards the objective, but most of the available cover is heavily irradiated, making Anti-rads and anti-radiation artifacts a must-have. As well, the player will be confronted by snipers and heavily-armed fighters. Therefore, a sniper rifle and an assault rifle with sufficient ammunition and medical equipment is advised.

There are two ways the player can go towards the Brain Scorcher - either they can follow the road or cross through the forest. The road is the fastest way, but has most of the resistance here - i.e. all the Monolith fighters. The forest road is longer, but has less resistance (only the aforementioned mutants), at the cost of being the most irradiated part of the map, as well as being filled with anomalies of various kinds. The forest way leads towards a grate that gives the player direct access to the main road.

The Brain Scorcher itself is a large bunker protected by no less than 20-30 Monolith fighters, including snipers. As well, in the vicinity of the antennas, the player will see apparitions caused by the intense psi-emissions. The bunker has a tunnel with the secret passage leading towards Lab X-19.

After the player deactivates the Brain Scorcher, the area is populated by Loners, who usually set their camps on the roads to the antennas. Also, as the player comes out of Lab X-19, the area is raided by squads of military just by the trains near the emitters, leading to a large cross-fire between Monolith fighters and the soldiers. As the player approaches the road to Pripyat, the player can witness a three-way firefight between Monolith fighters, as well as teams of Duty and Freedom experts - whoever wins will guard the entrance to Pripyat. If the player decides to go back to the Army Warehouses, they will have to encounter a contingent of soldiers guarding there.

The Red Forest in Clear Sky is different from the Shadow of Chernobyl version. Instead of being filled with armed Stalkers (most likely the Monolith), it's home to a variety of dangerous mutants, such as Psy dogs, Bloodsuckers, Snorks, and a lone Pseudogiant in the Symbiont anomaly, along with huge clusters of gravitational or Electro anomalies and a large area of radioactivity beside the road that stretches from the gate of Forester's site, to the access point from the Garbage that is only opened after the player completes some main quests in the area.

Stalkers have also occupied some of the territories; Renegades and Bandits have occupied the old mine that leads to the Compass and also the bridge leading to Limansk itself. Duty fighters established outposts near Forester's tower and will occupy the Renegades' mine after the quest to retrieve the Compass, and Loners have made a camp near the entrance from the Garbage. They offer a mission to the player to establish a camp near the Symbiont anomaly.

Originally, in Shadow of Chernobyl, it was going to be called Radar (left-over proving this is a road-sign in Freedom HQ in Army Warehouses), and was similar to the Garbage as it had peculiar line-shaped garbage piles; and hardly any trees.

It should also be noted that in Build 1935, the current entrance to Pripyat used to be a direct road to the NPP.

The Red Forest in Shadow of Chernobyl.

The Monolith outpost in Shadow of Chernobyl.

The tunnel at the Monolith outpost leads to a dead end. 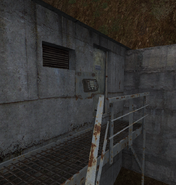 The locked door near the crossroads that lead to Pripyat and the Brain Scorcher.

The location of the secret door on the PDA.

The Red Forest in Clear Sky. 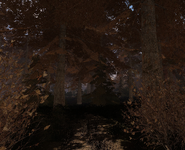 The clearing and claw anomaly in the eastern section of the Red Forest.

PDA showing the Red Forest in Clear Sky, dominated by the Monolith (green).

An early map of the Red Forest for Clear Sky.