Rodent (Russian: Тушкан, Tuʂkan), also known as Hamster in Call of Pripyat, is a type of mutant found in the Zone. Stalkers often referred to them as 'Tushkano'.

Determining the species from which the Zone's rodents developed has so far proved impossible although it can be said with certainty that their ancestors were gregarious mammals. Although these animals are similar with jerboas in appearance, there is no relation between them. Although some stalkers like Inquisitor, a mutant zoo keeper, refers to them as jerboas.

As evidenced in X18, it is suggested a good number these rodents were originally test subjects before the Chernobyl incident. After high dosages of radiation transformed these beasts into what they are now, the mutated rodents most likely escaped and wreak havoc in the Zone.

The Rodent is a quadrupedal animal reaching up to 40cm at the shoulder. They have large claws that can scratch big marks into Stalkers. Having frail and bony bodies, any weapon will do in disposing of them. Almost all hair has fallen out and only tightly wrapped skin can be seen.

Rodents are more mobile, aggressive, and ravenous than the normal desert animal. They live mainly in basements and destroyed buildings while feeding on everything they can get their teeth in, from plants to careless stalkers. It is not known if other mutants attack or eat rodents, but both their bones and dead bodies can often be seen around the entrances to burrows that some mutants use. Sometimes, rodents attack and kill big animals and mutants in a large group, tearing them apart before they can escape.

During the events of Shadow of Chernobyl, they tend to appear only in certain areas, such as the Wild Territory and the Dark Valley. They may inhabit Lab X-18 and X-16 after visiting the labs and deactivating the Brain Scorcher. They sometimes migrate to the Army Warehouses. Rodents may be also found in Pripyat, mainly around the Pripyat Stadium. A small pack of them can usually be found hiding in and around the bus stop on the road to the railway bridge in Cordon.

Note that if you revisit either the Dark Valley or the Wild Territory while running patch 1.0005 they are very common. You can also run into them near the Army Warehouses occasionally.

The Freedom leader Lukash based in Army Warehouses gives an optional side mission Destroy the herd of rodents as a part of his elimination mission line.

During the events of Clear Sky, they are almost only seen in the Agroprom underground hopelessly fleeing in droves when Scar flooded the underground at the request of General Krylov. They don't really attack Scar but prove to be a nuisance since they slow Scar down while making his way to the ladder.

Bodies of dead rodents have also been spotted in Agroprom, in the small camp on the hill south of the main duty outpost. They are most likely to have climbed up of the hole nearby.

During the events of Call of Pripyat, Rodents can be encountered in Pripyat, most notably in the Department Store. They can also be seen around many places in Jupiter, including the tunnels leading to The Oasis. They can be seen roaming in packs in Jupiter and Pripyat most notably during night. However, they are a rare sight in Zaton.

Appearance in Shadow of Chernobyl[]

In older versions of Shadow of Chernobyl, namely 1.0.0.0 and 1.0.0.1, an encounter with pack of rodents was a rarity. Patch 1.0.0.4 addressed this issue, adding more spawn points for these mutants.

Rodent image from the official site. 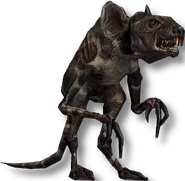