watch 03:19
Wiki Targeted (Games)
Do you like this video?
Play Sound

Stub
This article is a stub. You can help S.T.A.L.K.E.R. Wiki by expanding it.

S.T.A.L.K.E.R.: Shadow of Chernobyl (not required)

Full Dynamic Lighting with DX10 and all Special Effects

Have you ever dreamt of playing the old, forgotten S.T.A.L.K.E.R.?

Differences from Base Game[edit | edit source]

With an additional 80+ "Places of Interest."

As mentioned in the Overview there is a pretty eclectic mutant population in the Lost Alpha Zone. Most of these are best dealt with using small arms, a silent pistol is especially effective due to its ease of upgrade and low cost of maintenance.
Most of the audio cues and behavioral characteristics for the wildlife remain very similar to those seen in SoC, but there are differences:

For the most part armour carries over form Shadow of Chernobyl and there are limited possibilities for suit repairing and upgrading if the player has the wherewithal and inclination to track the Technicians down. They are much less prominent than in Clear Sky for example.

The 'Extended packs are released with the following explanations:

Contains a pack of updates and unofficial addons for ultimate Lost Alpha DC experience directly from some of Dezowave developers! This includes a full STCoP-based "PRM Weapons" DLC, a Gameplay Expansion DLC, Autumn DLC, Mercs visuals replacement DLC, Russian Voice DLC, new hands DLC, and a few other features (everything except Gameplay Expansion is optional). This also includes a 1.4006 pre-patch with all bug fixes for the main game that were made to this point. (Some addons contain third-party content, thus they are not official) 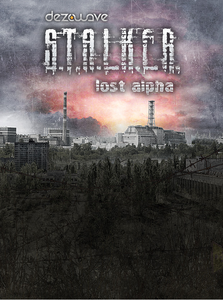 Cropped title image from Dez0wave
Add an image to this gallery
Retrieved from "https://stalker.fandom.com/wiki/S.T.A.L.K.E.R.:_Lost_Alpha?oldid=69905"
Community content is available under CC-BY-SA unless otherwise noted.