S.T.A.L.K.E.R Mobile is a game developed by Qplaze, that features S.T.A.L.K.E.R in mobile phones, although the phone must be capable of supporting Java2 applications.

Ingame, it plays out much like the S.T.A.L.K.E.R. series: Fight enemies, trade items, get missions and get gear. Most of the equipment and artifacts featured in the mobile version are the same ones featured in the game. Although unlike the PC series, this does not have a real storyline and it deviates from the series' feature of no level systems as now one can upgrade their accuracy, health, strength and anomalous/bullet resistance by leveling.

In combat, enemies are marked with a downward triangle which serves as their health counter and changes color as they continue to take damage. Health and armor are now depicted more as "lives" rather than protection/bar.

The player could also enter codes, to enable cheats, and throughout missions. 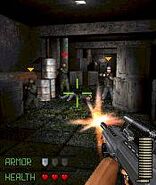 A screenshot of S.T.A.L.K.E.R mobile, being engaged by bandits.

Engaging an enemy with an IL 86.

Ingame trading.
Add an image to this gallery
Retrieved from "https://stalker.fandom.com/wiki/S.T.A.L.K.E.R.:_Mobile?oldid=61752"
Community content is available under CC-BY-SA unless otherwise noted.