A modified version of the silent Vintar BC sniper rifle, the assault rifle was designed as a special forces weapon. The rifle's primary purpose is effective fire against enemies employing modern personal protection equipment without disclosing the shooter's location. Thanks to its integrated silencer and 9x39 caliber round with a heavy subsonic bullet, the weapon's noise and muzzle flash have been reduced to a minimum.

It is an assault rifle variant of the Vintar BC sniper rifle.

This weapon is the personal weapon of Colonel Skull, and a few Monolith experts who will attack the barrier in the Military warehouses, as well as more Monolith veterans in the later parts of the game. It is also sometimes used by Spetsnaz units, mostly by experts in Pripyat and the Chernobyl Nuclear Power Plant. As well, Exoskeleton-clad Duty experts use the weapon, namely in Pripyat.

The VLA Special Assault Rifle is sold by the Barkeep on rare occasions, as well as Petrenko once the player achieves a good status with Duty.

One stash Package for Duty in Red Forest holds this weapon.

It cannot mount a scope though a custom one called Sniper VLA can mount a PSO-1 scope. Oddly, the weapon exhibits absurdly high recoil when firing full-automatic (about twice as much as other assault rifles), so it is not recommended for use at medium-long range fire.

It is arguably the best Warsaw Pact weapon available in game due to its amazing accuracy, good rate of fire, hard-hitting ammunition and low weight (the same as the Viper 5), making it very valuable in Limansk when faced with many Monolith members. Its only drawback is the heavy ammo chambered by the weapon, but in Clear Sky it's not that much of an issue. Its recoil is quite noticeable when firing in full-auto. This may be caused by its bolt mechanism which is similar to the AK-74.

The SA Avalanche is available at where you got hit by the emission in the cutscene at the beginning by the trains in the swamp.[source/verification needed] Tooth might occasionally have it in his inventory if the player is neutral towards the Bandits (i.e. the player hasn't killed even a single Bandit) with the price of 21,000 rubles, he will usually have one in his inventory once the player has completed the job of bringing Sidorovich's loot back to him or one may encounter a Bandit equipped with this weapon (however, it's very rare to find one). But once one reaches the Red Forest it becomes more common.

It can be obtained from a stash Half-buried log in Limansk.

The SA Avalanche is the standard issue rifle to heavily equipped Renegades in the tunnel deep in the Red Forest and the guards stationed in the bridge to Limansk. It is also found on experienced Bandits fighting in Limansk and the standard weapon of veteran Monolith troops.

The SA Avalanche only has 2 tiers of upgrades which is concerned with improving its accuracy and reducing its recoil and weight. It can be upgraded by Thunderov, Limpid and Yar.

The weapon of choice for Duty experts and the majority of Monolith's Veterans and Experts, the SA Avalanche is most common in Call of Pripyat's later stages — if the player doesn't side with Duty in Yanov the first chance to grab it will likely be in the Monolith ambush in [the Jupiter Underground, or in combat with the Preacher or from generic Duty or Loners members. NPCs often use the SA Avalanche with an attached PSO-1 scope.

The weapon is versatile with three tiers of upgrades, which allow it to more or less negate the 9x39mm's drop off, while bringing the rate of fire substantially higher. A fully upgraded SA is quite possibly the best stealth weapon available, with its favorable rate of fire, low recoil, high accuracy, damage, and penetration, is silenced without the 20% stat penalty, and the ability to mount a scope, allowing you to quickly take down enemies at close to medium range. The light weight and excellent handling seals the deal.

The one drawback, however, is that the weapon's durability can degrade rather quickly if used recklessly, simply due to its rate of fire. Thus, while it can do quite well in assault roles, it will quickly be worn out after a firefight or two and jam rather frequently, opting one to instead exploit its accuracy and use it as a marksman weapon.

If a player acquires a rare Targeting x5 PSS-2X scope, it can fill in the same role as its sniper rifle cousin with a higher rate of fire and magazine capacity, albeit with a lower zoom. However, the ability to remove the scope for cqb fights helps offset this. 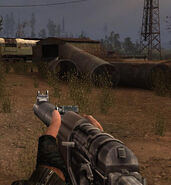 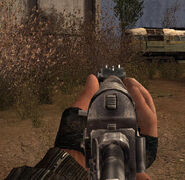