Created by one of Kiev's defence research institutes, the SEVA suit represents the pinnacle of personal protection technology available for neutral stalkers. Combining a lightweight bulletproof vest, closed cycle breathing system, and an integrated anomalous field suppression device, the SEVA suit will allow a stalker to last more than just a few days in the Zone. Stalkers usually use it to protect themselves from anomalous areas.

Duty employs its own variant of the SEVA Suit, the PSZ-9Md Universal Protection, while Freedom and the Mercenaries have their own variants in much smaller quantities, only in Shadow of Chernobyl. The Monolith faction has its own counterpart, named the Scientific Monolith suit, based on a classic Monolith suit.

The SEVA suit has anomaly protection that is nearly as good as the SSP-99 Ecologist suit and the SSP-99M Suit. It offers better bullet/splinter protection than the regular SSP-99 suit, but is bested by the SSP-99M Suit in terms of explosion and chemical burn protection. The SEVA suit is nearly identical to the PSZ-9Md Universal Protection in both appearance and properties. It has mediocre durability, decent bullet protection, and very good anomaly and radiation protection. It is one of the best suits to use in highly irradiated areas such as the Red Forest. Being a hazard-type suit, It is one of few suits that includes a second generation night vision device. (the others being SP-99, SP-99M, and PSZ-9Md.

The suit is widely used by Veteran Loners and Mercenaries. Murk is the only known user of the Freedom variation.

The SEVA suit is for the most part a military HAZMAT suit with a light Kevlar vest which can stop pistol bullets. It possesses the highest anomaly protection of any suit in the game and can have both its armor and anomaly protection upgraded to a significant degree (costs lots of Rubles). It is the first suit in the game the player can buy that comes with a night vision module, and it is one of the only suits that can be equipped with five artifact containers. On the downside the SEVA suit has poor durability even with the appropriate upgrades; a brief firefight can cause noticeable damage to the suit, thus compromising its anomaly protection systems and therefore making the suit not especially well suited for prolonged combat. For the anomaly hunters, its ideal. A great suit to use when seeking financial rewards. After all money is needed to acquire the good combat equipment.

The SEVA suit has not yet reached widespread use among stalkers as Duty is the only faction that is seen with a variant of this suit.

The suit has three tiers of upgrades available. Both its anomaly protection and bullet protection can be upgraded. Limpid who is based in the Garbage is the only technician that can fully upgrade this suit. Protection from various anomalies can nearly be maxed out in Clear Sky, and in both Clear Sky and Call of Pripyat it is unmatched in anomaly protection. It can be upgraded to include a second-generation night vision device. Fully upgraded, this suit can easily take the player all the way through the game, especially decked out with five artifacts.

The SEVA suit returns, further deviating from its original role as a top-tier armor. Again, it has the highest radiation and anomaly protection – the SEVA suit is in fact a quest-related suit needed to access Pripyat. SEVA's durability, rupture, and gunfire ratings are rather low, even with extensive upgrades; furthermore, in Call of Pripyat these ratings cannot be boosted with artifacts.

Additionally the SEVA suit occupies both the head and body slot, preventing the player from using any sort of night vision or targeting gear that comes with combat helmets and it does not have a night vision upgrade on its own. This can be partially redeemed by using NV/targeting scopes and rifle upgrades.

Interestingly, the Call of Pripyat SEVA suit has a smaller, less reflective helmet, which makes it more difficult to pick off a SEVA suit user's head when sniping. Despite the obvious switch towards the "scientist suit", NPCs who wear SEVA suits are still treated as experts, and as such wield high-end weaponry and are very durable.

Overall, the SEVA suit is actually a pretty bad suit since the player cannot have their own helmet when wearing the SEVA suit, the suit itself does not come with any night vision and has pretty low protection from bullets and rupture. Also, it is heavy (it weighs 10 kgs) and its anomaly protection is not as good as one might think, comparing it to the exoskeleton and even the upgraded Sunrise suit with gas mask. This is compounded by the fact that artifacts can be used to boost anomaly protection, one cannot use them to boost combat protection. It only gives really good psy-protection, but psionic radiation is not a big problem in game, unless fighting Controllers.

The SEVA has five upgrade paths but the player cannot use a helmet while wearing it. The player will also have to make some hard choices; such as between the much-needed Tier 3 armor upgrade and the suit weight reduction, or between the carry-weight upgrade and +1 artifact slot. There are several psy-protection upgrades to choose from, and the Tier 3 one can even be upgraded without the Calibration Kit (as it is done by Novikov).

The SEVA suit has gone through several iterations throughout Shadow of Chernobyl's development. There are at least three versions in existence: the first one has a lighter, gray/violet colour in addition to a completely different helmet hood, and still features oxygen tanks instead of the life support systems. 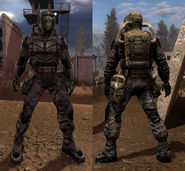 Loner in a SEVA suit.

Retrieved from "https://stalker.fandom.com/wiki/SEVA_suit?oldid=70921"
Community content is available under CC-BY-SA unless otherwise noted.