A model developed back in 1975 but still popular all around the world. Its magazine has low capacity, but its mechanism is absolutely reliable. Its second advantage is the use of the high-powered Kora round.

The handgun performs exceptionally well with a fairly large magazine, superb accuracy and stopping power. This gun has similar stats to the UDP Compact, and choosing between the two is largely a matter of taste. The SIP-t M200 is cheaper, more accurate and has slightly better handling, but holds one less round in the magazine and is slightly less powerful in comparison to the UDP.

The M200 can only be bought from Petrenko after attaining a friendly reputation with Duty.

It can be found in Borov's secret stash in Dark Valley.

The weapon is commonly held by veteran and expert Duty, Freedom, Mercenaries, and Monolith stalkers.

Notable users that carry this weapon as a sidearm:

The SIP-t M200 is exclusively used by Mercenaries, and cannot be found or bought anywhere else. The only place where it is likely to be found is by salvaging the bodies of killed mercenaries in the Dark Valley during Freedom's purge of them.

The weapon is a lightweight pistol which weighs less than 1.00kg loaded with a sizable magazine capacity of 10 rounds and fair performance. Its stats are similar to the UDP Compact although having a larger magazine. It can be upgraded by most technicians and is, in opposition to its description, not too durable, but isn't jamming too frequently.

The only remaining mass produced model of a globally renowned pistol, this weapon has earned a reputation for its excellent ergonomics and accuracy, and while its magazine is relatively small, it benefits from powerful ammo and a mechanism that functions like a Swiss watch. Some believe the SIP-t M200 to be the best mass produced .45ACP caliber handgun there is and it has certainly got a following among experienced stalkers and mercenaries.

This weapon also appears in Call of Pripyat. It is capable of three-round burst-fire with a tier 3 upgrade. The SIP weighs less than 1.00kg loaded and boasts a balanced mix of accuracy, firepower and low recoil, although it only has a limited 7 round magazine, akin to the Kora-919.

One can find this pistol early in the game in a pile of boulders north of the fueling station, along with ammo, food and medical supplies and many Mercenaries use this as their sidearm. Nimble sells a unique variant; the Alpine. 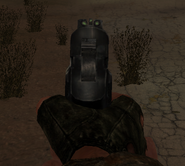