This special purpose smoothbore automatic shotgun was designed in the second half of the 20th century and comes with pump-action and self-cocking firing modes. Used as an all-purpose weapon by the police and assault troops. Notable for its reliability and tactical flexibility. Despite its large weight, complex mechanism and considerable cost it is in demand in the Zone due to its effectiveness against mutants.

The weapon is powerful at close range, but is quite heavy at 4.4 kg. Unlike other shotguns in the game, it is semi-automatic, yet still fires slowly at the rate a pump-action shotgun shoots (it can fire with decent speed, but it has huge recoil while shooting as fast as possible).

The SPSA-14 is relatively unpopular because other weapons like assault rifles have better damage over range. It is still popular with some players and is generally considered an improvement over the Sawn-off dbl barrel. It has a greater spread and recoil and a bit less damage than the Chaser 13. It is a great weapon against mutants, so one might want to take one into Lab X-16 if one is found.

A single stash - Backpack of the tester in Yantar - contains the weapon.

The bandit Poker has the special version with rifled barrel, named Threaded SPSA14.

It uses the same upgrades used by all combat shotguns and is surprisingly cheap to maintain and upgrade. It's as reliable and effective as the Chaser 13, but while loading faster and being able to load two more shells, it is much heavier, so choosing between that two is up to player's likings.

The SPSA-14 is more available in Clear Sky: it's sometimes held by Duty members and some Loners wearing Exoskeletons.

It is sold by Mitay regardless of faction alignment.

Alternatively, if the player managed to save Sergeant Cheersov near the entrance to the Agroprom Underground from the swarms of Snorks that would come out of there, he will give them his SPSA-14 with 20 extra slug rounds when they talk to him (though even if he is killed the player can still pick it up without the extra ammo though they don't have a chance to get the coordinates of the rare Walker P9m pistol, and the weapon will be damaged and less accurate due to that).

It can be obtained from a single stash: Blue crate

In Call of Pripyat, the SPSA-14 is readily available almost right from the start, and will likely become a mainstay weapon for the player. Of the shotguns, it is only second to the Eliminator in overall stats, and is capable of fully-automatic fire by default. It has a much better handling and rate of fire after only a few upgrades, and the punch it packs makes it just as useful for zombie or bandit disposal as it is against mutants. The Duty faction uses it as their standard shotgun while it is carried by a few other Loners.

Coordinates for stash with this weapon are given to player after finishing Transaction for Beard, also Gonta rewards the player with a SPSA if one completes the Hunting the Chimera side mission and Garmata (and obviously Gonta) survive, and more experienced Bandits in Zaton and Jupiter will start carrying it by default once some of Beard's/Sultan's faction quests are completed.

Nimble can sell a Carabiner – a unique variant of SPSA that comes already modified for faster rate of fire, allowing the user to spend another upgrade on lower recoil or an even higher rate of fire. While heavier than the Eliminator, after upgrades it has the same capacity and superior handling.

In Yanov there is a stash with one under just west of Yanov station. It is in the small pond, under the small pier.

Combat shotguns like the Chaser 13 and the SPSA-14 can chamber different shot shells at a time; for example, in one SPAS-12 one could load 4 shot shells, 2 Slug rounds and 2 Dart rounds. This is done by pressing the fire key during reloading and causing the player to stop reloading. Once satisfied with initial load, pressing the load different ammunition key ("Y" by default) will have the player chamber new shells once he resumes reloading. This method allows one to adapt to different situations quickly as one can rapidly switch from unarmored hunting to armor puncher in a moment's notice. 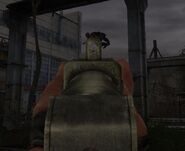 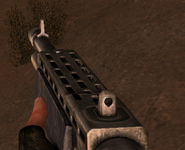