High quality modified SSP-99 suit. It provides increased body protection from bullet and splinter damage. It is designed for the guards working with scientific expeditions. It provides good protection from radiation and biological anomalies. It is resistant to chemically aggressive environments and other effects dangerous to the body.

The SSP-99M Suit is a protective bodysuit designed for scientific expeditions into the Zone. While it appears in all games, it is available to the player only in S.T.A.L.K.E.R.: Shadow of Chernobyl.

This suit is a high quality modified SSP-99 suit. It provides increased body protection from bullets and splinters, as it was designed for guards working with scientific expeditions. This suit comprises a closed-cycle breathing module and an integrated anomalous field suppression system. Anomaly and radiation protection is equal to that of the SSP-99 suit, making the two unmatched in those terms. This suit provides bullet protection equal to that of the SEVA Suit but offers better explosion protection and higher durability, and it even weighs less. All of this combined with a second-generation night vision device make it one of the very best suits in the Zone with only 2 disadvantages: price and pretty poor durability, but still - it's worth it.

SSP-99Ms are sold by Sakharov after the player has completed the Lab X-16 mission. It is also available as a reward for completing the Bring the Unique Bodysuit mission given by Sakharov.

The suit can still be seen in front of Sakharov's office. It is, however, unobtainable.

SSP-99Ms can be seen in front of Novikov's window in the Mobile Lab. If the player hires Sokolov for the Jupiter Underground mission, he will wear this suit. It seems to retain its abilities from Shadow of Chernobyl, as Sokolov is more resistant than Vano and Zulu who wear the SEVA suit and the PSZ-9Md Universal Protection, respectively. Later in Pripyat, Serbin and his team (including Barchuk) are all seen wearing the suit. 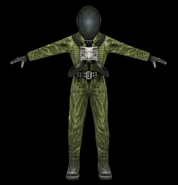 Model of the Eco suit.