An army sniper rifle that has been on the market for more than fifty years and has earned its reputation for exceptional reliability and ease of use. The SVDm-2 is normally used by the army to improve the effective range of its units, but stalkers respect this weapon for its armor-piercing properties, which allow it to penetrate mutant hide and army body armor.

The SVD is used by Monolith snipers on the pathway through the Red Forest, although according to its description it is also used by mutant hunters of Duty. Despite the latter description, Duty members never wield the rifle here, or in any S.T.A.L.K.E.R. game for that matter. Colonel Petrenko may sometimes sell it for 60000RU (as of version 1.0005).

Monolith snipers also use it in the first section of the Chernobyl Nuclear Power Plant. One is standing not far from the first BTR-70, and the other is on the other side of the plant (eastern side).

Ammunition is sparse but as of Patch 1.003, Freedom can provide the player with plentiful ammunition.

The SVDm-2 is the second-most powerful sniper rifle in the game, surpassed only by the Gauss gun. It is capable of easily penetrating medium armor, very likely to cause Stalkers with anything less to collapse from bleeding, and is highly accurate from any range. It also still possesses a fairly decent rate of fire, although the second-slowest of all sniper rifles, still making it easy to make follow-up shots if the player fails to kill a target with a single shot.

Along with the usual poor close-combat performance inherent with all sniper rifles, its only other drawbacks are its weight and the rarity of both the gun and its ammunition.

In Clear Sky, the SVDm-2 is the sniper rifle widely fielded by Freedom and it is held by the base guards. In some uncommon cases, Freedom Experts use it as their weapon. It is only purchasable from Ashot when the player joins Freedom.

In addition, one can get an SVDm-2 and an Exoskeleton as a reward from Freedom for destroying the Duty base. The Renegades use this sniper rifle in the Red Forest - while lowering the bridge to Limansk and although they appear in inaccessible areas, there are slight chances one will fall down the hill and into the accessible area. Monolith fighters also use this sniper rifle in Limansk (they are on rooftops and in a tower at the end of the city), in the Limansk Hospital, and extensively at the CNPP. Three Monolith snipers will spawn once the player walks a certain path to trigger the sequence.

It can be upgraded for optimum precision and less recoil but only by Yar, Freedom's technician. When fully upgraded, it is the most accurate weapon in the player's arsenal. In the right hands, any Stalker will fall before this weapon with a single bullet to the head at all ranges.

The weapon costs a small fortune to repair because of the rifle's intricate mechanism, and it is advisable one keeps it fully repaired at all times to ensure optimal accuracy. Because of the weapon's quality, it cannot use cheap 7.62x54mm PP rounds and can only use the more expensive 7.62x54 AP rounds.

Yar is likely the first user of this weapon that the player will see — his version is difficult to obtain as he is always in safe areas, except during his side quest to Kopachi, at which time he is almost invulnerable (he has a huge amount of health). Freedom Experts who are not outfitted with an Exoskeleton may make use of an SVD, but they will only begin appearing after the player has visited Pripyat. Once the player has obtained the "A Friend of Freedom" achievement, it is regularly sold by Hawaiian.

The Monolith faction makes heavy use of the SVDm-2, with nearly every squad featuring a Veteran or Expert armed with it. SVDm-2 users can be easily spotted as they all wear Scientific Monolith suits. Various Monolith fighters also make use of it during the evacuation - namely one at the top of the tower where the Monolith Master is found. If the player sided with Duty, this is likely the only place they will be able to acquire the SVDm-2. Lieutenant Kirillov gives one to the player for free during the side-mission One Shot.

The upgrade tree can either fine-tune the SVD's accuracy and bullet velocity to near-Gauss rifle performance, or can be optimized for better handling and reduced recoil, allowing the player to use it more as a high-powered semi-automatic rifle. Its scope can be customized for long range (6x) and night vision or target identification, making it one of a small handful capable of distinguishing friend or foe and 'seeing' through foliage.

Nimble sells a unique version called Lynx. Even though it does not look any different in appearance, it has been taken apart, heavily customized, and reassembled manually by an expert gunsmith. The result is a weapon that provides better stopping power and accuracy to the user that is second only to the Gauss rifle.

Originally, the Dragunov was supposed to have wooden furniture and appears as such in pre-release builds. For one reason or another, the Dragunov's wooden furnishing was replaced with synthetic ones by the time Shadow of Chernobyl was released. 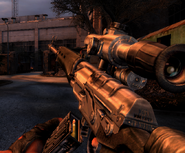