A modernized version of the SVUm-2 sniper rifle in a compact bullpup design made on the order of rapid response forces. It allows faster precision fire and is considerably lighter, while its single shot firing accuracy at short and medium range is similar to that of its predecessor. These qualities have earned it the admiration of countless stalkers.

The SVUmk-2 is a 7.62x54mm compact bullpup sniper rifle. It is primarily for either a player who needs a compact yet powerful sniper weapon or for urban firefights, where its short size will be more of an asset than a hindrance, or a player who would prefer to travel with a light yet powerful sniper weapon. Compared to its larger cousin, the SVDm-2, the SVU has shorter effective range, slightly lower damage, and accuracy, but is lighter, has less recoil, slightly faster fire rate, and still packs a sizable punch due to its large caliber.

In all games the magazine capacity is a standard 10 round, but it can be upgraded to 15 as a tier 1 upgrade in Call of Pripyat.

It has a lower damage per shot and accuracy than the full-size SVDm-2, but offers a much higher fire rate, making firing follow-up shots easier. The SVU is generally more effective against multiple targets, while the SVD performs better at taking down fewer targets. The damage and accuracy difference are, however, not very notable, making the SVU an effective weapon in the right hands.

It is sold by Skinflint when the player attains a friendly reputation with Freedom; it will cost 75,000 rubles. The weapon may also be sold by Barkeep later in the game, too; but the chance is very low. There is also one in each sniper tower inside the Freedom Base. The rifle is easily obtained through the Kill the tower sniper mission given by Skull.

Although, if the player wants it without compromising their reputation with Freedom or paying a hefty sum for it, their best chance would be to loot it from Max. To do this, accept the Destroy the Duty company mission from Lukash and simply do not help Max's squad in dealing with Skull's company. Because everyone in the Duty company are equipped with Exoskeletons and powerful weapons, whereas the Freedom strike team uses light armor, the Dutyers will be able to massacre Max's squad with ease while taking little to no casualties.

The player can now sprint while holding this weapon, due to its compact nature, but it is less effective at long range compared to the SVD, due to the weapon's short barrel. However, it still has more range than any assault rifle. The SVU can be upgraded for superior accuracy, reduced weight, and reduced recoil, making it perfect for those demanding a highly accurate and lightweight high-powered sniper rifle.

The SVUmk-2 rifle may be found on a dead body lying in the Army Warehouses in the Bloodsucker Village, but this is a random drop.

Also, the SVU can be obtained from Chekhov. In the Freedom base player has to holster his weapon, but it can be used freely in the old factory behind actual base. After getting into this area, and positioning yourself on the ground next to the truck, it is possible to see the two back windows of Chekhov’s office and part of his head. From this position Chekhov can be killed and then his SVU can be looted from his corpse.

The SVU is employed by Freedom's veteran snipers, though they don't spawn on common intervals. Chekhov also uses an SVU.

The weapon can be upgraded only by Yar; he will require all 3 upgrade USB schematics. The upgrades focus on lowering its weight, reducing recoil, and increasing accuracy.

The SVUmk-2 has became much rarer in Call of Pripyat, as most factions prefer to use the Vintar BC and the SVD. The only known faction to use the weapon is the Freedom, with a few Veterans and Experts that may spawn with the weapon. It is Strider's weapon of choice and can be easily acquired by either killing him, or having him die in the Jupiter Underground, which isn't particularly hard due to his weapon making him ineffective at taking down targets at close range. It is also sold by Hawaiian once the player has gained the A Friend of Freedom achievement. There is a slight chance that a Monolith marksman spawns with the weapon during the Underground ambush. The weapon may also be acquired in stashes, one of which is under the bridge in Yanov.

The rifle can be upgraded to have similar stats to a full-size SVD, but it cannot be modified to have the nearly-essential target identification upgrade. On the other hand, it can be upgraded to make use of an integral silencer which muffles any sound, without the drop-off of 9x39mm rifles. However, unlike 9x39mm rifles, the SVU will now suffer from a 20% loss of accuracy, range (though will still retain range longer than any 9x39mm rifle) and damage because of the silencer. However, if the player compensates the drop in performance, they could very well turn a fully-upgraded silenced SVU into the perfect stealth sniper weapon.

Also, the SVU can be upgraded to have adjustable scope, which along with lighter weight and much better handling makes the SVU more effective at medium range than the SVD.

This is the only sniper rifle that can be upgraded to have adjustable scope and higher magazine capacity. Though without any upgrades, the SVUmk-2 may lose in some situations even with the Vintar BC which, after only Tier 1 upgrades, will have enough accuracy to fulfill a sniper role and win against the SVDm-2 thanks to smaller weight and much better handling. After handing to a technician the Calibration Kit, the player can unlock the full potential of the SVU by adding adjustable scope, which will help player at mid-range combat. 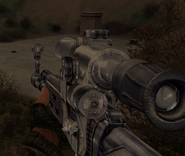 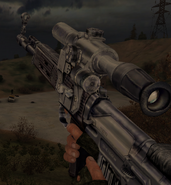