Sakharov has been studying the Zone ever since the first research laboratories were set up on its perimeter in 2007. He is a professor of genetics, but dabbles in pretty much every scientific field his Zone research encompasses. His politeness and professionalism, along with a tendency to offer stalkers lucrative contracts for artifacts and mutant body parts, make him a very popular employer. He leads a small group of ecologists in Yantar, along with his assistant Professor Kruglov and Semenov.[1]

His lack of actual experience in the Zone has led to him being considered a bit crazy by stalkers who take on his missions, especially when they entail going into the Yantar factory.[2]

He gives a number of missions for artifacts and mutant body parts. The things he wants are: Jellyfish, Gravi, Fireball (a great exchange for a Pellicle), Urchin, Moonlight, Boar's Hooves, Blind Dog Tail, Flesh Eye, Snork foot, and a Bloodsucker Jaw. He sells Ecologist suits and army supplies (weapons and ammunition). If the player rescues Kruglov in Wild Territory, he will give them a SSP-99 and if you successfully take psi-emission measurements with Kruglov, he will give the player a Stone Flower along with a functional psi-protection helmet. He will notably give the player a powerful SSP-99M Suit after receiving the Ghost Suit.

He sells the SSP-99 suit, the SEVA suit, the Tunder S14, IL 86 and the Obokan and the Chaser 13 along with ammunition for the respective weapons. Once you help Kruglov take the necessary measurements for the Psi-helmet, he will start selling the Chaser 13 and the IL 86. However once you deactivate the psi-emitter in lab X-16 he will start selling the SEVA suit and Tunder S14 along with 9x39mm PAB-9 rounds. Sakharov will also slash his prices and buy items from you at a better price after X-16.

In Clear Sky, Sakharov has two quests that are vital to the player's progression through the game, but does not give any optional quests. One quest is retrieving a PDA of a fallen Loner squadron who managed to get diagrams about Lab X16's "Miracle Machine" Psy emitter out of the factory's technical documentation archive, but were killed when a few of their members turned into zombies. The second one is assisting Lefty's squadron repair the cooling mechanisms of Lab X16 in order to prevent the emitter from releasing further emissions in Yantar, thereby allowing a section of the factory to be explorable and enable the player entrance to the Red Forest.

In Clear Sky, Sakharov sells exotic munitions for weaponry, with all of them armor piercing rounds which are not readily available from most traders, such as armor piercing 5.45mm and 5.56mm munitions, used by the majority of assault rifles. He also sells 7.62x54mm munitions, both the sniper 7N1 rounds and the cheap PP rounds used by the PKM and 9x39mm SP-6 rounds. Last, but not least, he offers for sale rare and powerful armors like the Exoskeleton and the "Bulat" armored suit other suits include the SEVA suit and the Berill-5M Armoured Suit. Overall Sakharov is a valuable trader as he sells a large selection of gear that would normally require one to join a certain faction to obtain, his only drawback being he does not sell nor does he buy firearms. Being a Scientist, he sells the widest array of medical supplies: he has all 3 medkits for sale and the largest sale of bandages (most often ranging from 8-10 pieces per sale). He buys artifacts for 80% of their base value (Sidorovich pays 90%, and other traders pay about 60%).

There are many references to Sakharov in Call of Pripyat. One notable one is the "Psi-dome" upgrade for suits. It states it was designed by Sakharov. Another reference is made by Professor Hermann who used to visit Sakharov's mobile lab before relocating. 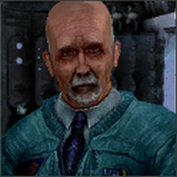 Mess with Sakharov, get the Makarov (or RPK in this case, after one being sold to him)