watch 02:45
Wiki Targeted (Games)
Do you like this video?
Play Sound

The suit is used exclusively by the Monolith faction, mostly by Monolith veterans and experts, except in Clear Sky where it is only used by Monolith rookies. It provides the wearer with excellent anomaly and radiation protection and high bullet and shrapnel protection.

Despite the suit not being obtainable to the player, several Monolith fighters can be seen wearing it. In Shadow of Chernobyl, it is mostly used by veteran Monolith fighters, who will mostly use a AC-96/2 to go with it in Pripyat, or a Gauss rifle in the final levels. In Clear Sky, it is rather uncommon as it is mostly used by rookies. In Call of Pripyat it is issued to a good amount of Experienced members using assault rifles (namely the TRs 301) and Veterans using the SVDm-2. 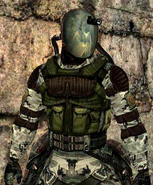 Monolith SEVA in Shadow of Chernobyl. 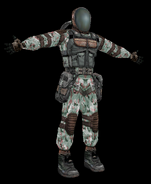 The Monolith SEVA as it appears in Call of Pripyat. 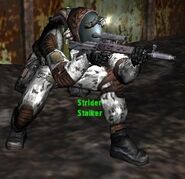 Strider wearing a Monolith SEVA.
Add an image to this gallery
Retrieved from "https://stalker.fandom.com/wiki/Scientific_Monolith_suit?oldid=70720"
Community content is available under CC-BY-SA unless otherwise noted.