The Skat-9 military armored suit is another armor built in the same line as the Skat-9M military armoured suit, allowing greater mobility at the expense of protection.

It is very similar to in overall shape to the Skat-PM variant. It is distinctively different, as instead of grey urban camo, it features a European woodland pattern and instead of a tactical vest, an armored breastplate on the front.

The SKAT-9 armor first appears as a wearable armour in Build 2205. It is fully functional, complete with an inventory icon and player model. It provides protection which overall (within Build 2205) is slightly below that of the SKAT-9M armor (later named the Bulat armour) but elevated in certain curious areas, notably psionic and firearm protection.

Shadow of Chernobyl includes a partially functional version of the SKAT-9 armour, similar to the status of the Army Outfit; the in-game models and textures remain, but the wearer appearance graphic and inventory icons have been removed (the former to make room for the icon corresponding to the PSZ-9Md Universal Protection armour). However, at least one in-game image features the SKAT-9 armour, which can be seen by going to the Encyclopedia entry for "Military Stalkers" in the in-game PDA.

If the armour is somehow obtained in-game and worn by the player it provides complete (100%) protection and immunity from all damage sources, including Psionic damage.

Four soldiers wearing the early variant (with a different respirator) of the suit can be seen at the Chernobyl Nuclear Power Plant, standing atop a structure facing the entrance to the Sarcophagus, each armed with a SVUmk-2. They are strangely ranked as simple soldiers.

Having 60 bulletproof AND night vision out-of-box, the Bulat armour is a great choice for Stalkers who like to engage in aggressive gunfights. It is fully upgradable - with an additional cost of many rubles and extra weight. With armoured Kevlar plates and/or durability/integrity upgrades, the Bulat suit can protect wearer from rifle bursts. But this armour has 2 major flaws: heavy weight, and it can only be upgraded to include two artifact containers. As the description says, it's capable of greatly dampening bullet damage, even without upgrades, however grenades exploding at close range will still be able to deal massive damage and even death. The suit is expensive to modify, but if fully modified for durability, armour integrity and with dual composite armour plates almost any type of assault rifle round fired from medium range to long range will barely do any noticeable damage; making the player a walking dreadnought with the right weaponry. If fully upgraded for anomaly protection, it can include full protection from psy-emissions. The suit is a combination between the Exoskeleton and the SEVA suit, as it combines great bullet protection and moderate anomaly protection (perhaps the highest of any unmodified combat oriented suit). Also, the Bulat enables the wearer to sprint, although it doesn't increase the wearer's strength.

The armor may be purchased from Sakharov after returning the PDA with information pertaining to the factory's cooling schematics. It also occasionally appears in his inventory even before turning the PDA in. It is also sold by Mitay.

In Call of Pripyat the Bulat remains a high-end armour. Unupgraded, it has the same bulletproof protection as a fully upgraded Berill-5M armoured suit, and its anomaly protection is only slightly worse than that of the CS-3a body armour. Fully upgraded it loses only to the Exoskeleton; however, the Bulat can still use a helmet taking advantage of helmet upgrades as well as the superior night vision of Sphere-12 helmet or infravision of Tactical helmet. It has no artifact slots by default but can be upgraded to two.

The Bulat has four upgrade paths. While the +2 artifact slots upgrade requires the Calibration Kit, since the player will most likely get Bulat in Pripyat itself, one shouldn't need to wait long before unlocking the suit's full potential. It has both weight reduction and carry weight upgrades, as well as relatively strong utility (health, bleeding, etc.) upgrades. 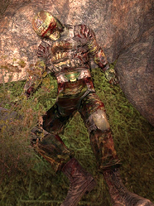 Another picture of the armor using the original helmet. 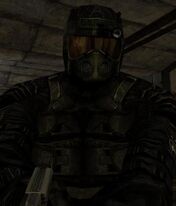 Close up of the original visor

The original design for the Skat-9 armor, from Build 1510. Note the transparent visor.

The very first concept of the armor 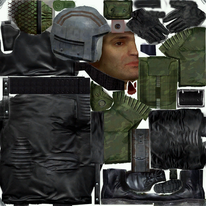 Texture of the first concept.

Retrieved from "https://stalker.fandom.com/wiki/Skat-9_military_armoured_suit?oldid=66404"
Community content is available under CC-BY-SA unless otherwise noted.