The Slime is a common artifact featured in S.T.A.L.K.E.R.: Shadow of Chernobyl.

It is certain that this artifact is created by the anomaly called "Fruit Punch". When carried on the belt, the wounds bleed less, although the body of its owner becomes vulnerable to various burns.

The Slime decreases bleeding by 133% but decreases burn and chemical protection by 10%.

A more common artifact that can be found exposed in the Wild Territory.

It can also be found in many secret stashes: 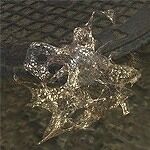