The Slug is an uncommon artifact featured in S.T.A.L.K.E.R.: Shadow of Chernobyl.

Formed by the "Fruit Punch" anomaly. The negative qualities of this artifact are compensated by the fact that it heightens the coagulation quality of blood. It's not often that one runs into such an artifact, and they pay well for it too.

The Slug decreases bleeding by 267% but decreases burn and chemical protection by 10%.

The Slug is given as a reward for the optional mission Kill the soldier or Help the stalkers fight off the bandits at Agroprom given by the Barkeep and the mission Find the weapon of the Dutyer given by Brome. It may also be found lying out in the open in the Wild Territory, or in a box inside of the Sarcophagus, but the player can get a variety of other artifacts here instead.

It can be looted from the following stashes: 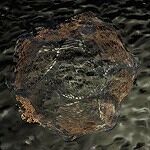