Modification of storming weaponry for firing single shots. It was assumed that it was going to be used as a cheap analog to the sniper rifle.

The Sniper TRs 301 is a unique variant of the TRs 301 assault rifle featured only in S.T.A.L.K.E.R.: Shadow of Chernobyl.

The Sniper TRs 301 features an integral scope and silencer attachment, as well as receiving a significant increase in accuracy and durability. However, the fire rate is lowered to 300 RPM.

The usefulness of this weapon to the player is debatable. While it has significantly better stats all-around than the standard TRs 301, it isn't very hard to acquire a GP37 with higher damage and rate of fire. As a silenced sniper rifle, a Vintar BC can fulfill the same role.

On the other hand, this weapon features the highest accuracy among all assault rifles, an integrated silencer and scope (making it a good long-range stealth weapon), and uses the lighter and more common 5.56x45mm rounds. It also has a bigger magazine and higher bullet velocity (less bullet drop) than the Vintar BC. A marksman may even prefer this TRs 301's lower rate of fire for better multi-shot accuracy.

While the modifications performed in converting the base unit into the sniper variant do not degrade its power, they do affect the performance of its sighting resolution as follows:

Iron sights of a TRs 301, displaying the same zoom as the Sniper TRs 301's scope.

Vintar BC scope for comparison.

Which may be summarized by suggesting that the Sniper TRs 301 has been fitted with the equivalent of an optical iron sight.

This weapon is located in the Army Warehouses, in the Mercenary camp. General Voronin hands out a mission in which he requests this rifle, in return for a Vintar BC. However a Vintar BC can be found free of charge, laying on the ground in the Freedom barracks, making the reward that Voronin offers somewhat less appealing, but in any case overall better than the Sniper TRs 301, meaning one could take Voronin's quest and eventually sell the rewarded Vintar for a fair amount of cash. 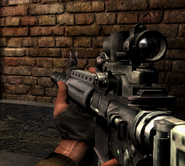