At first glance, this artifact resembles Kolobok. Some claim that it actually is Kolobok, its properties reinforced by exposure to a powerful electric field. The artifact has excellent electrostimulative properties, increasing the bearer's vitality considerably. Emits radiation.

The Snowflake increases endurance by a heavy +6, allowing the player to easily recover endurance even while running. However the Snowflake also gives a +3 in radiation, meaning one must use a Wrenched or better to counter the radiation effect.

At first glance, this artifact resembles Kolobok. Some claim that it actually is Kolobok, its properties reinforced by exposure to a powerful electric field. Thanks to its unique properties, the artifact can significantly increase the bearer's muscle tone. Emits radiation.

The Snowflake returns in Call of Pripyat with the exact same effects as its previous rendition, making it a valuable artifact to use. It is also part of Beard's artifact orders.

Combining two Snowflakes with the energy drink, Hercules drugs, and sprint-boosting armors grants a lot of stamina, which is very useful on longer trips, allowing the player to stay on the move almost constantly.

The Snowflake may be found in any electrical anomalies; the rooftop anomaly field of the Yubileiny Service Center in Pripyat spawns one (sometimes two) Snowflakes by default. 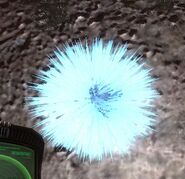