The Soul is an artifact featured in all three S.T.A.L.K.E.R. games.

The Soul increases health regeneration by a heavy +600%, allowing the player to easily recover health, especially when the player combines this with suits like the Ghost suit. However, the Soul decreases overall hit protection by 10%, which can be countered by heavy suits and is more or less negated by the higher health regeneration.

The Soul is a rare artifact that can be found near a Bandit camp in the Garbage. One is also located in an highly radioactive hill past the Vehicle graveyard, near an alcove full of powerful Vortex/Whirligig anomalies.

The Soul may also spawn in the Dark Valley, Lab X-18, and Pripyat, in the monument near the Palace of Culture square. Another has the chance to be found in a secret stash located in Yantar.

The Soul returns in S.T.A.L.K.E.R.: Clear Sky as a common artifact that increases health regeneration by a light +2, but radiation by +2 as well. The granted bonus is nearly insignificant, making the artifact better traded than used.

The Soul returns in S.T.A.L.K.E.R.: Call of Pripyat, identical to its Clear Sky counterpart, meaning one could sell it rather than using it.

The Soul may be found in chemical anomaly fields; the Quarry and Concrete Bath anomalies in Yanov spawns one by default. The Soul is part of Snag's loot in the Unreachable Stash and can be obtained by either having Cardan open the box or give Snag the box and ask to take the Soul - if Snag kept the Soul for himself the player will have a second opportunity to obtain it during the Theft mission, in Snag's stash.

The Soul is commonly sold by Beard after completing Beard's side of the Compass mission. 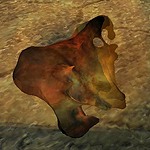 Soul in Shadow of Chernobyl.
Add an image to this gallery
Retrieved from "https://stalker.fandom.com/wiki/Soul?oldid=71202"
Community content is available under CC-BY-SA unless otherwise noted.