The Sparkler is a common artifact featured in all three S.T.A.L.K.E.R. games.

Found near the Electro type of anomaly. Quite widespread and inexpensive artifact. But still it is valued among the researchers in the Zone for its qualities.

The Sparkler is a quite common artifact. It gives the player a slight boost in endurance, and as with all endurance-increasing artifacts, increases the damage dealt by electric shocks by 10%, making the user more vulnerable to Electro anomalies.

It is a good artifact to use as it allows the player to run for longer and regenerate more endurance while walking. However, the boost given is slight and it is outclassed by the Flash.

This artifact can be found in these stashes:

The artifact may also be spawned randomly near Electro type anomalies. However, as with all artifacts produced by Electro anomalies, the Sparkler artifact will only be active between the in-game hours of 00:00 and 05:00. During this period, the artifact will be visible to and obtainable by the player. Sparkler artifacts that are dropped onto the ground outside the hours of 00:00 to 05:00 will deactivate shortly afterwards and will not become visible or obtainable again until the next iteration of the designated time period.

A bright representative of the electrostatic family of artifacts, this artifact can smooth fluctuations in electric field density. Emits radiation.

In S.T.A.L.K.E.R.: Clear Sky, the Sparkler gives the player slightly more protection against electric anomalies, at the cost of slightly more radiation (+1). Considering its very low effectiveness, it is best sold to traders than used.

A bright representative of the electrostatic family of artifacts, this artifact can smooth fluctuations in electric field density. Emits radiation.

The Sparkler returns in S.T.A.L.K.E.R.: Call of Pripyat, now giving the player a +3 boost in electrical protection, and +1 in radiation, meaning any radiation-absorbing artifact will contain the Sparkler's radiation.

Just like its Clear Sky rendition, the Sparkler has very little effect and is best traded than used.

The Sparkler can be found in electrical anomaly fields; the Iron Forest in Zaton spawns one by default.

Beard also sell Sparklers after the player gets the One of Ours achievement. 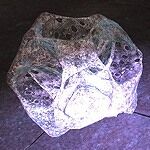 Sparkler artifact in Shadow of Chernobyl 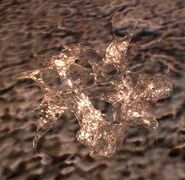