Edit
watch 02:34
Fire Emblem Warriors: Three Hopes - The Loop
Do you like this video?
Play Sound

An aluminum/titanium helmet with a cloth exterior that comes with pockets for additional steel armor pieces and an armor face mask. Sphere M12 is normally used as part of a combination that includes PSZ series Spetsnaz body armor. Quite popular in the Zone thanks to its respirator and built-in first generation night vision device, as well as providing the maximum head protection possible. Comes with electronics slots.

A high quality, aluminum/titanium combat helmet with cloth camouflage used by Duty and the military, the Sphere-12 is perhaps one of the best available helmets, with slightly higher gunfire protection and psionic protection than its brethren. It comes by default with camouflage (Woodland pattern for military stalkers and urban for Duty). It is normally used as part of a combination that includes PSZ series body armor. Comes with electronics slots.

It is usually worn with a gas mask by stalkers, although variants with a simple faceplate are also common among military stalkers.

It can be acquired from Owl in the late-game, and the Military's outfitter, Lieutenant Kirillov, will provide the player one for free if they request an outfit when they meet him. Oddly, it becomes less common than the Tactical helmet afterwards, as Owl rarely has it in his inventory. But, after the achievement "A Wealthy Client" and "A Friend of Duty", Hawaiian may commonly have it in his inventory.

It comes with a 1st-gen nightvision installed, and can be upgraded to second and third generation NVGs, the only helmet which can - although it lacks the thermal imaging upgrade of the tactical helmet. Its anomaly protection options are limited compared to the other helmets, and even fully upgraded is obviously meant to be used only for combat.

Like in former games, NPCs wearing the Skat-9 military armoured suit or the PSZ-9d Duty armor will have an included Sphere M12.

Hover cursor over upgrade images for description. Only one upgrade per tool tier is available in any given row.

Originally, the Sphere M12 helmet was supposed to have an additional tier 3 upgrade: a target acquisition system, like the one in the binoculars. It is not known why it was removed. 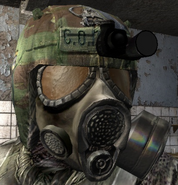 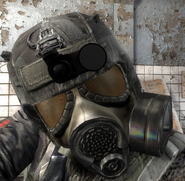