Supreme Commander-In-Chief (The President of Ukraine)

The Cabinet of Ministers (the Ministry of Internal Affairs) of Ukraine

The Zone posses mortal danger! We are here to protect you from Zone, not the Zone from you! Do not jeopardize your life, do not try to penetrate into the secured area!

Loudspeaker broadcasts at the Cordon

Regular army soldiers. They guard all roads into the Zone, patrol its perimeter, kill mutants and hunt down looters. Spetsnaz - elite army troops, usually dispatched to the Zone to conduct rescue operations and other special missions.

The Ukrainian government, through its Ministry of Internal Affairs (Ukrainian: Міністерство Внутрішніх Справ України (МВС України); Ministerstvo Vnutrishnikh Sprav Ukrayiny (MVS Ukrayiny)), maintains the Zone's perimeter with internal troops from the State Security Service[1]. The internal troops, who are often referred to simply as the Military, are tasked with providing and maintaining security along the borders of the Zone, in order to prevent unauthorized incursions by stalkers, and by extension, distribution of artifacts to the outside world without government supervision. They are in practice however, one of the most corrupt groups operating within the Zone; security personnel frequently shoot at stalkers for sport, engage in extortion, and accept bribes in exchange for ignoring smuggling operations.

In the early days of the Zone, internal troops of the State Security Service formed the bulk of human presence in the area. While it is never directly established how much territory was under military control, it can strongly be assumed by wreckages and abandoned fortifications that most of the Zone was at least lightly overseen by Ukrainian security personnel. In the wake of the First and Second Emissions however, the military steadily lost its hold over the interior of the Zone to newly formed anomalies and increasingly more prevalent mutated wildlife. Following the debacle they issued a decree stating that any unauthorized personnel who attempt to enter the Zone was to be shot on sight. However, because of the corruption and low morale of the remaining military garrisons, this act was poorly enforced as people who were awed by marvelous stories of the Zone became attracted to it and started exploring the very area that the military barred it from. These people came to be known as stalkers.

The Military always had a shaky relation with other factions, namely the Loners faction. However, they would eventually make deals with the illegal stalkers - this included information and access to the military checkpoints.

By the events of S.T.A.L.K.E.R.: Clear Sky, the Ukrainian Army is relatively prevalent in the Zone. However, the Second Emission that begins Clear Sky had shaken up the military considerably, and, caught in the middle of the faction wars and new anomalies, the military loses significant amounts of territory. Most notably, their primary base in the Zone, the Army Warehouses, is infested with psychic anomalies, turning all but a dozen of the men stationed there into zombies. The surviving soldiers are soon after the event mopped up by the mercenary Scar, in order to gain access to the watchtower's communication systems.

In their secondary base in the Cordon, however, the military seems to have fully recovered. They are better organized with a lot more firepower, which Scar finds out when he first enters the Cordon from the Great Swamps. Their stationary machine gun turret on the second floor of the northwestern building of their base is quite an obstacle, covering a large area to the North and the West of their base. This gun is so powerful, its rounds can penetrate through fully grown trees and still cause damage when they hit.

The Military's grip on Limansk is limited to a small outpost in a house in the center of the city held by Military Stalkers. It is later shaken up as the Monolith and Clear Sky factions both pour into the area, along with the other factions such as Duty and Freedom, who attempt to push into the Zone's center. Their garrison (with another stationary machine gun turret), along with a patrolling military helicopter, are annihilated by Scar.

By the end of Clear Sky, the Ukrainian Army's presence in the Zone is all but eliminated, restricted to monitoring the entrance to the Cordon. At some point between the events of Clear Sky and S.T.A.L.K.E.R.: Shadow of Chernobyl, however, the Military establishes a power-base in the Agroprom Research Institute, taking it from the Loners and Duty.

The Military make a final appearance at the Pripyat Hospital, where the player has to shoot down a Mil Mi-2 helicopter gunship. Finally, they are part of the opposition rushing to the center, they can be seen fighting; although since the scene between the Hospital and the CNPP chase was removed from the original game, they are not actually encountered by the player.

By 2012, the Military are much less prevalent then they were in Clear Sky, having lost much of their territory in the faction war and the aftermath of the Second Emission. However, they have a much more secure grip on the Cordon at this point, as well as a new commanding officer (Major Kuznetsov), having presumably eliminated Father Valerian and disrupted the unity of the Loners faction. In addition, they occupy Duty's former headquarters in the Agroprom area, and routinely launch raids upon the stalkers in the surrounding areas. Their Agroprom base is raided by the Marked One on Sidorovich's orders, to recover information about a possible way to the center of the Zone.

Initially, the military remains unaware of the more recent developments in the Zone. After the Brain Scorcher is deactivated by Strelok however, the Military launches an aggressive campaign to retake Pripyat and the Chernobyl NPP, sending in elite Spetsnaz and Airmobile units along with armored and aerial support in the form of BTR-80 APCs and Mil Mi-24 Hind gunships, in an operation codenamed Operation Monolith. Despite this however, those that are not killed by the fortified Monolith faction or Strelok are presumably killed in the Third Emission, erasing whatever gains the military may have made.

It is perhaps worth noting that the focus of the military changes between the two games. In Clear Sky, the military is dedicated towards sealing the Zone and establishing superiority,despite significant casualties. By the time Shadow of Chernobyl approaches,the military are more resigned to their position as a thorn in the Stalkers' sides, and have changed priorities, assisting the Ecologists in securing Yantar and leading investigations into the suspicious activities around the Zone committed by the previous occupants. Their garrison in Yantar seems to have been wiped out however, with most of the personnel turned into Zombies, leaving the task of securing the Bunker to Dutyers, Loners, or Mercenaries looking for work.

Following the failure of Operation Monolith, the military launched a new operation codenamed Operation Fairway, which would allow the military to seize the CNPP for good. Unlike the previous operation, the involved helicopters (codenamed Stingray) were equipped with anti-emissions systems. However,the operation failed again, and all five helicopters crashed on their way. Surviving members then regrouped in Pripyat. SBU agent Alexander Degtyarev was then sent in the Zone (disguised as a regular stalker) to find out what happened. After he finds out the helicopters were hit by airborne anomalies, he meets the survivors in Pripyat, and help the few surviving soldiers to escape the Zone.

The military generally uses Warsaw Pact weapons, generally the same used by the Ukrainian army. Special forces and military stalkers generally have access to a greater variety of weapons and equipment.

In order to inform anyone who's trying to illegally enter the Zone, warnings are voiced through a megaphone at the Cordon's southern military checkpoint:

Attetion! You're approaching the secured perimeter of a ecological disaster's Zone! Illicit crossing of the perimeter is a criminal act!

Any attempt to penetrate the secured Zone will be punished by any means necessary! Patrols have the right to shoot on sight!

The Zone posses mortal danger! We are here to protect you from the Zone, not the Zone from you! Do not jeopardize your life, do not try to penetrate into the secured area!

The Security Service of Ukraine is calling all right minded and loyal citizens to collaborate with the authorities! Report all known cases of stalking! Do not let the looters hide behind your backs! They bring radioactive, unidentified items from the Zone that are highly dangerous for human health and life! Only with your help can we eliminate this hideous phenomenon! Do not put your lives and the lives of your families at risk for the sake of dubious profit!

A low-ranking soldier in Shadow of Chernobyl.

A low-ranking soldier in Clear Sky.

Major Kuznetsov, a commanding officer in Shadow of Chernobyl.

An army commander in the Zone.

Major Khaletskiy, the commanding officer of the troops stationed in the Zone in Clear Sky. 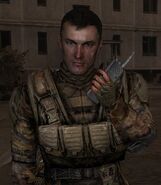 Colonel Kovalsky, commanding officer in Call of Pripyat.
Add an image to this gallery

Retrieved from "https://stalker.fandom.com/wiki/State_Security_Service?oldid=71996"
Community content is available under CC-BY-SA unless otherwise noted.