View source
watch 02:52
Roblox: DeepWoken - The Loop
Do you like this video?
Play Sound

I don't know whether I was right or wrong, I guess I'll never know... But I made it. And I guess I should be thankful for that.

Strelok after destroying the C-Consciousness.

Меченый (Mechenyj) as it is written in Russian, roughly translates to "The Marked One". Giving a general description rather than a name for the player's character is fairly common in video games as it allows the player to substitute the title with any name that they wish.

Стрелок (Strelok) in Russian literally translates to "Rifleman" or "Shooter".

One of the most experienced and capable stalkers in the Zone, Strelok and his associates are some of the few people that managed to reach the Chernobyl Nuclear Power Plant and live to tell the tale. He began accumulating experience early on, as he was one of the first stalkers, people to enter the Zone and bring back artifacts.

During one of his excursions, he found maps of the underground city under Pripyat. Realizing that this would allow him to bypass the Brain Scorcher and reach the power plant, he gathered his men and set out. This first raid to the center of the Zone was unsuccessful - while Ghost, Fang, and Strelok infiltrated the Sarcophagus, they were stopped from reaching the Monolith Control Center by a code-locked door.[6]

During their retreat, the Common Consciousness became aware of their presence virtually on its doorstep. Furious, it unleashed a massive emission in an attempt to kill them. Strelok was critically wounded in the process and put in the care of Doctor by his two friends.[7]

Strelok is the main protagonist of the game. Having survived the crash of a Death truck, Strelok was rescued by an anonymous stalker and Sidorovich. With little memory left, Strelok, dubbed as the Marked One as a reference to his S.T.A.L.K.E.R. tattoo, is only left with a PDA entry reading "Kill Strelok". With no other choice, the Marked One, unaware of his true identity, begins to search for Strelok within the Zone. The Marked One follows the information from contact to contact, tracing Strelok's past movements and learning more about his supposed assassination target; the more he learns about him, the more he recovers scattered memories.

After assisting Professor Sakharov in his research of the Yantar area, the Marked One is able to secure a fully functional Psy-protection device that will shield him from the damaging effects of the Kaymanov emitter in Lab X-19 and, later, the Brain Scorcher. He finally finds Ghost's corpse in the laboratory X16 after disabling the troublesome Kaymanov emitter and killing the Controller responsible for his demise. When Strelok manages to escape Lab X16 with the documents from Ghost, he learns of Guide, a member of his group. Upon finding Guide, Guide tells him about Doc, who was in the group's hideout in the Agroprom underground. After making his way there, the Marked One trips an explosive trip mine which knocks him unconscious. When he awakes, the Marked One sees Doc, who tells him that the Monolith is just a lie - it was made in a laboratory inside the Sarcophagus - and of a decoder that Fang assembled, hidden in a hotel room in Pripyat. Doc also informs him that he is actually the stalker called Strelok, his earlier intended target.

Now, with Strelok remembering the most important information, he proceeds north to the Brain Scorcher, where he manages to overcome numerous Monolith troops to deactivate the Brain Scorcher and then makes his way to Pripyat, where he finds Fang's grave and the decoder that Fang hid in an abandoned hotel.

With the aid of a few expert Stalkers, Strelok fights his way to the Chernobyl Nuclear Power Plant, fortified by fanatical and dedicated veteran and elite Monolith troops; and under attack by Spetsnaz, agents accompanied by APCs and Hind Gunships.

Against all odds, Strelok fights through the hordes of Monolith soldiers, with the Military nipping at his heels, and manages to enter Reactor #4 in spite of the impending Fourth Emission. Whilst in the Sarcophagus, Strelok faces off with Monolith's most elite troops, and with considerable effort in the heavily irradiated areas, manages to neutralize them. Ignoring repeated, tempestuous calls from the Wish Granter, he finds a strange, code-locked door that he is able to open with Fang's special Decoder (it has been speculated that this apparently must be the same door that Strelok's group failed to unlock previously). After defeating more of Monolith's elite agents, he destroys the generators which powered the Monolith, thereby destroying it. A hologram appears in place of the destroyed Monolith, a worker of the Common Consciousness experiment. The hologram answers some of Strelok's questions, such as the purpose of the Death trucks and C-Consciousness' ulterior motive. The hologram then prompts Strelok to either join them or be killed. Strelok chooses the latter and is forced to fight his way through still more elite Monolith troopers while teleporting from one area to another at the top of the old plant. Finally, Strelok is teleported to a central laboratory that contained stasis pods of multiple people that sacrificed themselves to cover up the deepest secrets of the Zone, the C-Consciousness. Using his AKM-74/2U, Strelok shoots the pods that support the C-Consciousness subjects, effectively destroying it.

Strelok makes an appearance in the prequel Clear Sky where he is the main antagonist. After being rescued by the secret Clear Sky faction, Scar, a standalone mercenary, is forced to track down his group, eventually learning of his existence after searching Strelok's hideout in the Agroprom Underground.

With the help of Sakharov, Scar manages to track Strelok down to the Red Forest. Strelok is briefly in plain sight but immediately escapes before Scar can apprehend or kill him. Lebedev, the Clear Sky leader, then exhorts Scar to stop Strelok, and Strelok responds with death threats if the pursuit of him does not cease. After chasing him to a motorized drawbridge, Scar must fend off an ambush launched by Loners hired by Strelok. Strelok takes advantage of the confusion to escape, blowing up the tunnel leading to the Brain Scorcher behind him. He assures Scar that it is no longer possible to follow him, and states that he will reach the center, whatever it takes.

However, unbeknownst to Strelok, Scar and the Clear Sky veterans managed to cut through the abandoned city of Limansk and the Limansk Hospital, another direct way to the power plant. Strelok is in the vicinity, defending himself from both the Monolith guardians and Clear Sky. With the help of the prototype EM1 Rifle, Scar disables the psy-blocker device Strelok is wearing - without the aid of the device, Strelok cannot survive the potent psi emissions for long, and Lebedev believes that the activity in the Zone will stabilize after Strelok is defeated. Fighting his way through swarming Monolith soldiers, Scar uses the Gauss Rifle to disrupt the device and succeeds. After Strelok is defeated, readings are taken to see if the stabilization is beginning. Suddenly, an unexpected and massive Third Emission occurs, reaching levels far beyond the norm. Everyone within proximity to the plant, Clear Sky or otherwise, is hit and begins succumbing to the effects of the emission. During the closing cut-scene, they can be seen crowded in the corridors of the NPP, shaking unnaturally, whilst video screens flash of historic images of the NPP with distorted black and white images. These signs foreshadow that those not already killed outright by the blast are about to experience a worse fate: brainwashed to become part of the Monolith forces; or, like Strelok, becoming unwitting agents of the Common Consciousness. Sometime after this; Strelok is rescued from the Death Truck and taken to Sidorovich.

Strelok is curiously absent through most of the early going of the game. Later on, stashes belonging to him can be found via a UAV module in the Yanov area. He apparently abandoned his SGI 5K used in Clear Sky, leaving it for Fang, but his comrade obviously never recovered it. The player can recover the rifle and Strelok's note - as well as a note he left for Ghost and a note Fang left him prior to their fateful trip.

He finally appears in Pripyat as a massive Fifth Emission strikes. It is here that he offers to provide the Military with information that will help them take control of the zone and destroy it. While he does not state to the player or Kovalsky what he has done, he wonders aloud if he made the right choice. He also offers insight that explains what happened to the helicopters of Operation Fairway, thus solving the game's main mystery and allowing a new helicopter evacuation mission to be called to Pripyat. The player can turn the notes over to him, winning his gratitude - and also extending his durability and efficiency in the game's finale.

Strelok aids the Military during their escape of Pripyat, cutting through the gathered horde of zombies, escorted by the group to the Prometheus Cinema where rescue awaits. The game has two endings 'portions' dedicated to him - one where Strelok survives the evacuation and joins a team dedicated to researching the Zone as an 'advisor', and another where he dies, taking the secrets of the Zone with him.

Strelok was initially confirmed, through leaked design documents, to appear in S.T.A.L.K.E.R. 2 as the main protagonist.[source/verification needed] Not much else is known about his role. In 2020, Skif was confirmed by GSC to be the new protagonist instead. [8]

Strelok's ending in Call of Pripyat

Strelok as he appears in Shadow of Chernobyl

Strelok about to fire his AKM-74/2U

Strelok about to go north

Strelok in the Sarcophagus

Strelok inside the Monolith control center

Strelok resting after destroying the C-Consciousness

Strelok in the after destroying the C-Consciousness

Strelok (right) after the emisson in Clear Sky 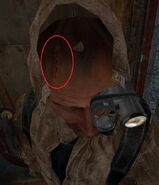 A scar on Strelok's head

The Marked One's portrait in Shadow of Chernobyl

Strelok's portrait in Call of Pripyat